On road 60 up to Shuyukh-Sair, all the blockades and gates

to Hebron are open.

At Shuyukh-Sair the entrance to Hebron is closed by concrete barricades on which the state flags are still painted.

At the entrance to Kiriyat Arba a soldier in the booth is accessorized from head to foot.

Although the improvised synagogue Hazon David was destroyed, IDF vehicles are present there all the time.

Now pedestrians headly go there. To the grocery which is situated at H2 no fresh supplies were brought today because of this. 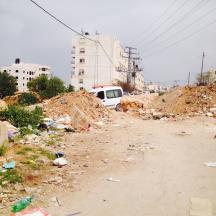 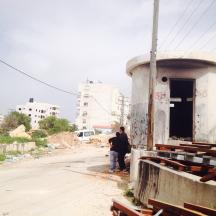 The area of the Cave of the Patriarchs bustles with visitors.

A large group of of interested persons (from the Right, judging by their attire and general look)

At the watch posts there are girl soldiers too.

Abed says that yesterday there were people of "Shovrim Shtika" with a group here. They continue.

At the Shuhada street, from end to end there are crowds of soldiers guarding. At the entrance to Shehunat our father Abraham there are soldiers in the booth.

At the Gross square, very near to the cemetery, there is a booth and a soldier in it.

At the incline of the first steps to the Cordoba school there is a soldier.

At the incline of the second set of steps to the school, opposite the Hadassa House, there is a soldiers.

The Tarpat CP looks now exactly like the passage from West Berlin to East Berlin, 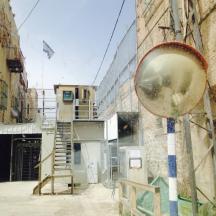 At the entrance to Tel Rumeida, as usual there is a blockade and also a booth with a soldier but it now also is on the right side of this road, at the site of the famous event. 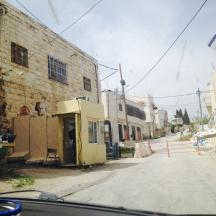 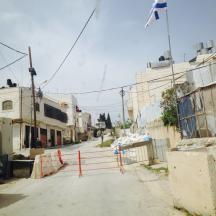 On the crossing road, at curve 160, girl soldiers release a detained person. We saw the end of the event, while he arranged his clothes after he had been asked to remove them.

18 year old girls perform such an invasive search to an adult person. His expression says it all. And we, where shall we put our anger and shame?

Thus one solves the problems -  more humiliations, more fences, more posts with soldiers… all with the purpose that people of the kind of Barukh Marsel, Offer Ohana, Itamar Ben Gvir, Anat Cohen may continue to go wild and abuse others.

Back by road 317. Nothing special except the new neighborhoods at Carmel Ma'on and Sussiya, which are splendidly displayed and look beautiful from the road.

And they tell us that the building in the occupied territories has been stopped.