Last week I was able to spend a couple of days with our team in Bethlehem visiting some of the families and projects there.
As you approach Bethlehem , long before you reach Manger Square, the view is dominated by the wall, the separation barrier which Israel started constructing in 2002 in response to the violence of the second intifada. When completed, the barrier will stretch for 703km In 2009 nearly 60% was completed. In many places it is a fence with vehicle barriers and a 60m exclusion zone around it. But round Bethlehem and East Jerusalem it is an 8m high concrete wall. The International Court of Justice ruled that the barrier was illegal in 2004, but Israel kept building.
We visited a Catholic family whose house is surrounded on three sides by the wall, because they have the misfortune to be in the area where the wall makes a loop to include Rachel’s tomb. Before the wall was built, the Anastase family had a thriving shop selling Bethlehem crafts and ran a popular guest house. Now they are struggling to make a small income by selling on the internet and they had their first guests for many years(the brother of one of our Bethlehem team).
One solution for families cut off from their normal livelihood is to seek a permit to work in Israel, but at what cost! I joined the Bethlehem team at 4.30am on Wednesday morning as they made their way to monitor the Bethlehem checkpoint
(checkpoint 300). Men working in the Israeli construction industry start to queue here at 3 am. The gates

at the checkpoint are supposed to open at 5am, and the humanitarian gate was supposed to offer unrestricted access for women, the elderly, the sick and internationals. Two of us wormed our way to the front of the umanitarian line, while a third EA made her way down the exit line to observe what happened as people came through the gate. At 5.30am there was still no movement.
We were being jostled by men who had joined the humanitarian line in the hope of getting through to the other side of the gate via a hole in the corrugated roof. I began to feel faint. I was offered the option of fighting my way back through the line to get out, but I knew I wouldn’t make it. Someone gave me their place where there was more air and I was thinking - this is the line for the sick and the elderly ! Finally at 5.50am the turnstiles began to move. Once on the other side of the turnstile IDs are checked, the men in the humanitarian line without the appropriate permit are sent back to join the other line.
The rest begin the run through the warehouse-like structure which leads to the metal detector and airport style procedure. Then, there is the handprint and electronic ID check before finally emerging to catch a bus or works minibus into Israel. We emerge to meet the Israeli women from Machsom Watch who monitor the checkpoint from the Israeli side but the men who are very irrate by this time get to them first to tell them what a bad morning it is. We share a cup of coffee with the Machsom Watch women and then start to make our way back through the checkpoint to meet our fellow EA at the other end. It’s after 7am now and more women are coming through. I’m told many of them are teachers, but they get the same treatment from the young Israeli soldiers. By 8 am the queue has gone and around 2,000 Palestinians have made their way to their daily work in Israel. 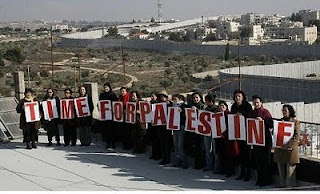 On a more hopeful note I would now like to talk about two projects which are trying to find a peaceful, more sustainable way forward. Near the wall we visited the Sumud Story House ‘The sumud (steadfastness) programme supports education in values, culture, and identity. The programme aims to build a cadre of Palestinian youth, women and educators, aware of their Palestinian (inter) religious and cultural sources of inspiration and able to develop a strong value based message summarised in the Arab concept of ‘sumud’ This programme is supported by Pax Christi International. We sat with a very lively group of young Palestinian Christian Women as they engaged in a version of what we would call the pastoral cycle. This took place in a room furnished with traditional drapes and Arab couches, with framed versions of the women’s very moving stories hung on the walls. While the stories were very challenging the dynamic spirit of the women was infectious.

Travelling south from the city of Bethlehem, we arrived at another project with a vision rooted in the Palestinian ‘sumud’ to stay on the land. Daoud Nasser’s grandfather bought a large plot of land in a beautiful location in 1916. He and his two sons farmed this land living in the natural caves there. Daoud grew up there, but it is now surrounded by Israeli settlements and the Israeli’s desperately want this land which has been registered to the Nasser family for over 100 years In 1991, the Israeli government declared the whole area state property. The Nasser family contested this and the case is still under debate in the High Court. The latest development is the serving of a demolition order for various structures on the land eg animal shelters, toilets, tents etc.

Daoud’s response has been to develop what he calls The Tent of Nations at the centre of the land. Here he runs programmes for young Palestinians to help them to reconnect to the land and their heritage. He also welcomes young people from all over the world, some to work as volunteers on the land and in the centre, others to participate in youth conferences and exchange programmes. A tree planting programme brings the local community and internationals together as a sign of hope and solidarity and simple solutions to power and irrigation demonstrate how to sustain agriculture in a dry climate. One of the caves is now used for creative worship and it is obvious that the Tent of Nations both arises from and is sustained by the Christian faith of the Nasser family. 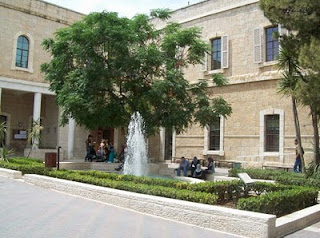 Another more traditional institution offering opportunities to young Muslim and Christian Palestinians alike is Bethlehem University. Started by the De la Salle brothers it remains essentially a catholic institution, but genuinely open to all. It too suffered during the 2nd intifada and one of its new buildings was shelled by the Israeli military before it could be used. Thankfully this building is now in full use, housing the library and a Palestinian heritage centre. I was welcomed by Nasra, a friend of Geoff Miller. She is director of events and facilities and her duties have included welcoming Bishop Martin Wharton with members of Newcastle Diocese and the Holy Land Coordination Committee of European and North American Roman Catholic Bishops. I hope that they, like me, had the opportunity to witness both the suffering and the potential of Bethlehem and its people.