What started as a short detention in the jail cell next to where the female soldiers are stationed continued (unrelated) to a detention of an hour and forty minutes at the police station in the checkpoint compound.

Why?  Even in retrospect, I don’t know why.

Nor did they, the detainers, know why at the time.

They searched for the why when we arrived escorted by a policeman and guards to the police’s rooms, where they consulted regarding what they could charge us with, and found something.

After an hour and forty, after they wrote situation reports (one for each of us), they issued us summonses for interrogation at the Shefet police station in Neve Ya’akov for Wednesday, three days from now, as well as a recommendation that we be forbidden access: “Maybe for a month, maybe for two weeks.”

During the entire unpleasant period of our detention there, in their company, what was most upsetting and worrying was to see in the adjoining room two Palestinian detainees

.  A man, and a boy about ten years old.  Father and son, who during the evening were taken somewhere by Border Police soldiers.  We could see, looking at the father silently, that he had more or less accepted the situation.  But the boy, the boy who sat opposite the intervening door saw nothing, even when our eyes met.  He sat frozen, stunned. 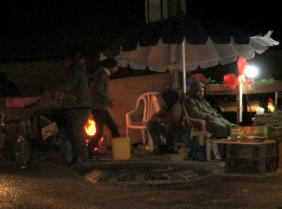 When the evening was over, when we exited into the cold, rainy Qalandiya night, the children still wandered frozen and wet in the thick darkness, tapping on car windows, and the peddlers, sellers of green almonds and bunches of sage, sat beneath a beach umbrella, hiding from the rain, beside a bonfire of twigs and boards that lit the darkness a bit and warmed the night’s chill a bit. 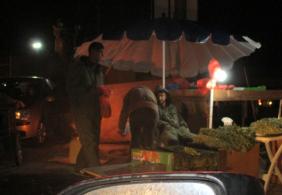 And, like an old, favorite expression, I again recalled a sentence of Celine:

“And later I went out and continued into the night, filled with shame, because I too, like my mother, never managed to feel that I’m not responsible for the catastrophes that occur.”

Journey to the End of the Night