Israel’s strategy toward both villages, Shufa and Labed, regarding access to their lands, is the same.  It’s also applied elsewhere:  Israel prevents Palestinian farmers from accessing their lands, not with checkpoints or fences, but by chasing them away whenever they come to cultivate them.  Later some of the land is declared “state land.”

West of Shufa and adjoining it is ‘Izbet Shufa – both share a local council.  Nevertheless, the army erected a barrier between them.  It not only separates them but also blocks a short, direct route from Shufa to Tulkarm.  Theft of land for the benefit of Avnei Hefetz began in 1986 and continues to this day.

Land has also been expropriated in Labed for Avnei Hefetz and Einav at the same time.  Today villagers are afraid that preventing farmers access to their lands hints at the danger of additional expropriations and declaring them “state land.”

10:30  The village of Shufa is located southwest of Tul Karm.  The settlement of Avnei Hefetz separates it from Tul Karm, the district center.

We met one of the municipal employees at the Shufa municipality.

Three months ago 43 dunums were declared “state land” because they hadn’t been worked for three years.

Two months ago 10 villagers were notified that they are forbidden to access their land near the Te’anim checkpoint (next to Jubara).

In addition, 20 days ago, the army came there and cut down olive trees and poisoned their stumps (so they can’t regenerate).

350 dunums were recently taken from them near the barrier separating Shufa from ‘Izbet Shufa, to construct an observation post.

Arrangements for plowing and olive picking:  There’s annual coordination with the DCL and the army for a week of olive harvest.  There’s no coordination or protection for plowing.  The settlers don’t interfere with plowing, but the army sometimes does…so they take a chance when they go to plow.

They feel the process of land expropriation has been planned in advance and will continue.

A Palestinian is notified their land is in danger by a court order posted on one of the trees with a warning or a summons to a hearing.  Often he’s unaware of the notice, and months later, when the hearing takes place, he’s accused of failing to respond when he received it.

Harassment by the army:

A few weeks ago a boy from ‘Izbet Shufa threw a rock at the road.  The army threatened that if it happens again it will demolish buildings constructed outside of Area B (where construction is permitted).  That same night it entered 15 homes to search and threaten residents.

Flying checkpoints.  Today at 07:00 (for the first time) two jeeps were stationed at the two ends of the village for two hours and inspected everyone who passed.  A third jeep drove through the village to see the response.

Sometimes they come at night, on foot.  If there are cameras on the buildings, the tapes are confiscated.

Water:  There’s a well in ‘Izbet Shufa, but because of the barrier between it and Shufa they’re unable, and also not allowed, to lay a water pipe from it.  In Shufa there’s a well only for drinking water and they’re forced to use it also for agriculture.  It’s obviously insufficient.

Inhabitants:  About 1,500 residents (which is why it’s a local council and not a town).

About 250 are employed by the Palestinian Authority.  300 youths are students.

About 30 percent go abroad after completing their studies because there’s no work here.

What do they want?

1.     To remove the barrier between Shufa and ‘Izbet Shufa – Hamoked Center for the Defense of the Individual is handling it.

We went to the municipal building and met the head of the village and some residents who were happy to see us and seemed glad to talk to us about issues regarding Israel/Palestine.

Lands and the fence:  The settlements of Avnei Hefetz and Einav have been erected on their lands.  Of their 16,500 dunums, 2,000 were taken.

There are two fences surrounding Avnei Hefetz.  One around the residential area comprising 1000 dunums taken from the village.  The other surrounds 1,000 additional dunums used by the settlement.

Farmers are permitted access to the area between the two fences only during the olive harvest, with the army’s permission, for a week.

There are also lands next to Avnei Hefetz outside the fenced areas that they’re not allowed to cultivate.  For example: the settlers come to a hilly area, plant an Israeli flag and forbid the settlers to approach.

What’s the origin of the name “Avnei Hefetz?”  The land belonged to the Hafachi family…so the settlement was called Avnei Hefetz (they say “they also stole our name”)

Farmers whose land is outside the external fence but near it are in danger:

A year ago A. and his children harvested olives on their land.  Suddenly three residents of Avnei Hefetz appeared, armed with knives, and threatened him that if he didn’t leave they’d slaughter him.  He left the land and when he returned in the evening to collect his equipment and the olives he’d managed to pick he discovered the hoodlums had stolen everything.

He complained to the Palestinian DCL which referred him to the police in Ariel.  They showed him photos so he’d identify the attackers.  They didn’t appear in the photos…Of course, it was impossible to identify anyone.

In another case, two years ago, the same three hoodlums caught an old man harvesting olives on his land, beat him unconscious and severely injured him.  Relatives found him unconscious.  He was treated in an Israeli hospital.

We agreed with A. to come again and accompany him to the fields to photograph.

Before we departed we left with the head of the village the phone numbers of  Hamoked and of Yesh Din.  They didn’t know about them.  We gave A. Sylvia’s phone number – he wants to work in Israel, but is barred.

The map:  the yellow line indicates Shufa’s territory.  The blue lines show the land taken from them. 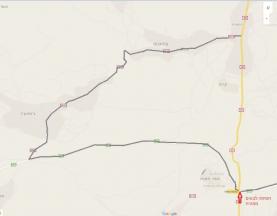