07:20 Prologue:  Our friend M. called us from A'anin checkpoint and informed us that his friend is not being allowed to cross despite the fact that he has a valid agricultural permit.  I called the Liaison and Coordination Administration to clarify the matter and gave the name and ID number of his friend to a polite soldier who answered.   After a few minutes I was told that the man can cross.  I happily call M. back who cannot talk because he is being checked.  After a few minutes he called me back and said that his friend and several other people were not allowed to cross.  He would tell me the details this afternoon.

M. met us at the junction and informed us that he spoke with people at the Liaison and Coordination Administration.  A policewoman said that they could not cross.  There was an argument on the phone - which the policewoman won.  The people did not cross despite the fact that they held permits.

15:05 – The reservists arrived and opened the checkpoint.  8 tractors were waiting to cross and their drivers and a number of young people crossed immediately.

15:20 – Epilogue – I approached the soldiers and asked them if they had been here in the morning as well.  They said that they had been there.  I asked if they know why four people had not been allowed to cross.  They did not know why.  They are only security guards.   The military policewoman was the person who made the decision.

15:25 – Two people arrived at the last minute and crossed.  One of them handed us a red anemone.  They are protected flowers and people are not supposed to pick them, but it was a meaningful gesture. 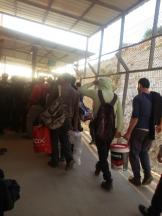 There was a lot of traffic relative to what is usually seen here.  People told us that everything is OK.  We think everything is far from being OK.

The official parking lot as well as the additional parking lot is filled with cars and cars are parked on both sides of the road.  Cars are driving through to the West Bank and the traffic conditions are not at all safe.

The playground equipment next to the parking lot has been completely dismantled and trees have been planted there instead.  There are a lot of workers going into the terminal through the fenced in sleeve

and two inspection positions are operating for people going to the West Bank.   It is very crowded next to the inspection booths and luckily those who work in Israel don't need to stop there.  People are crowded outside the turnstile as well, but they are crossing quickly.

17:10 – A young man approaches us on our way to the parking lot.  He is lucky because he has permits to enter both Israel and the seamline zone, but he has a problem.  He is a Palestinian and his wife is an Israeli from Nazareth.    They want to travel to visit their family, but his wife is only permitted to cross at Jalameh, but not at Barta'a.  We don't know how to help him.