There are sights at Qalandiya you mustn’t get used to.

It’s illegal and immoral for innocent people to be penned behind bars and blockades. 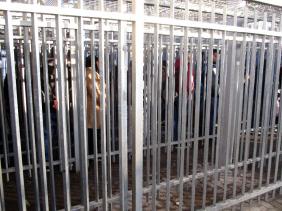 Even after years have passed, the reality of Qalandiya is something we must not get used to, as in the case of the mute man standing in front of me on line who, after removing his shoes and belt, and even though he’s 63 years old and according to the rules here men aged 55 and older who have a green ID card are allowed to cross without a permit, and even though he goes through every day, was turned back.

Why?  “Something’s not right with his ID” (the soldier told me).

-Don’t you have a computer there in order also to check things like that?

A stupid question.  Of course not.

They tried to chase me from the Jaba checkpoint, and they had reasons why I’m not allowed to be there:

– inspect every screw and rubber element of the motor – motion to the driver to come back, approach them and close the hood – return the ID’s to their owners – release the five detainees, residents of Abu-Dis, laborers coming home from work. 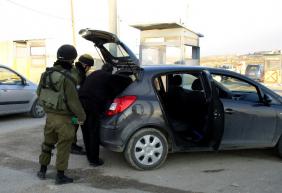 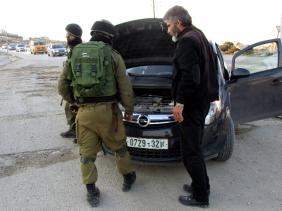 Then a look of satisfaction spread over the soldiers’ faces, as if they’d managed to defuse an atomic bomb.

But immediately, after a few minutes of rest, they wiped away their satisfied expressions and turned to deal with the next vehicle.