At the terminal, as usual, there’s an inside and an outside.

For years I’ve been trying to decide which is which, without success.

But there are always two sides, also at Qalandiya.

One side overflowing with garbage 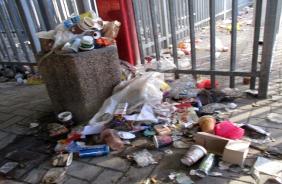 And one side clean and gleaming. 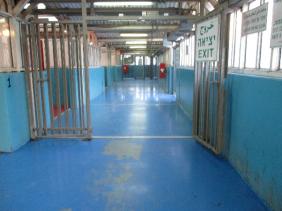 And in between, people who must cross.  They arrive at a terminal with the required valid documents, and at a terminal are always those whose job it is to inspect the documents’ validity, and when they see they’re valid and authorized – the people go through.  That’s how it is at a terminal.

But at this terminal, Qalandiya, it doesn’t work like that.  At Qalandiya the unexpected is normal.

The unexpected landed on the old man who presented to the soldier conducting inspection his green ID card and his signed, valid crossing permit and the soldier looked at it, looked at it again and checked on the computer and lifted his head and said “Blacklisted.”

The media reports the city of Ramallah has been closed off since Monday morning.  The military spokesman claimed it’s not punishment for Sunday’s shooting incident at the VIP checkpoint at the entrance to Ramallah, but because there’s information about planned attacks coming from the city.

Even if you believe the military spokesman that it’s not punishment, how is it possible to explain the fact that immediately after the shooting incident, already on the evening prior to the putative urgent alert, the main traffic arteries throughout the Ramallah area had already been closed?

‘Im’ad said there’s no point driving to Jaba, the checkpoint is closed.  We drove there anyway and received a tiny taste of the torture thousands of Palestinians suffered on the roads, the traffic creeping, crowded and congested, not trying to move forward but to find a place within the four lanes of traffic on a road wide enough for only one, driving across a rocky field to reach the entrance to A-Ram (we weren’t able to get to Jaba) and returning at the same rate of no progress to where we started an hour and a half earlier.  A mile and a half in an hour and a half.

While it’s true we’re not allowed to throw rocks at soldiers or to curse them, we are permitted to pass through a place that by no act of verbal legerdemain can be called a terminal.  The checkpoint is a checkpoint that prevents an entire nation from breathing the air of hope and freedom, while we’re allowed to return to our down comforter, and no one will come at night to break down our door.

The carpet merchants by the Qalandiya checkpoint crowded around a fire they’d built to chase away the cold and light the darkness and the child peddlers ran among the cars, trying to grab the day’s end and earn a few more shekels.

As we waited in the line of vehicles at the entrance to the checkpoint, a child’s small hand knocked at the car window.  Isma’il wanted to say hello.  I rolled down the window, cupped his hand in mine and felt as if I were holding a chunk of ice.  I wanted to warm the cold hand but the soldier waved me forward and Isma’il back and both the hand and the boy vanished.