The purpose of today’s tour was double: to meet a Palestinian who can guide tours we wish to renew and to watch an agricultural gate.

At 11:00 we met B, a man fluent in Hebrew, with an interesting world view. The meeting took place in the Nebi Elias municipality and was coordinated beforehand. B worked in the past in Israel and has many friends. Today he is working in some private enterprises and owns lands on the Israeli side of the fence which he reaches through Eliyahu Gate. He expressed his willingness to guide tours and host them in his home and garden. We also learned that all the people of Nebi Elias belong to one clan and each family has university graduates, including women. Women usually stop working when they give birth and go back to work after the children grow up. Many of Nebi Elias’ university graduates live abroad.

We also talked about the bypass road. According to B he participated in a meeting with the DCO where they (the residents) suggested that the road crossing the village will be widened with two lanes on each side and shops to be demolished for this purpose. The DCO asked for time to check the offer but came back with a negative answer. The route of the new road is less than 70 meters from the houses on the edge of Nebi Elias which means that some houses will have to be demolished and olive trees will be uprooted since the army insists on a security zone of at least 70 meters from houses. On top of that, this road will result in confiscating about 100 dunams of land. This is evil and stupidity. 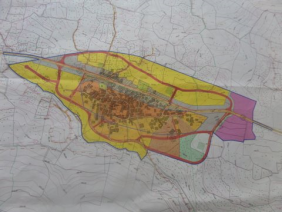 B indicates that there was never a terrorist incident in Nebi Elias, the residents seek peace and there is no reason for fear. However he says “Netanyahu wants to choke us”.

We asked for directions to the agricultural gate of Wadi Rasha (No. 1360) which appears in the DCO records. The gate opens once a week, morning and evening (we have to check which day). B who knows the area well said that the shortest route is through Kalkilia and Habla. The long way is through Azoon, then south to Thoulat, Abu Salman, Ras Atia, Habla and Wadi Rasha (we’ll try to get there on one of our next shifts).

Before leaving we went up to the roof for a view of the splendid scenery. 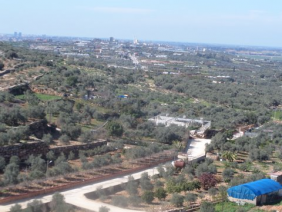 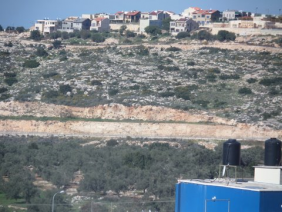 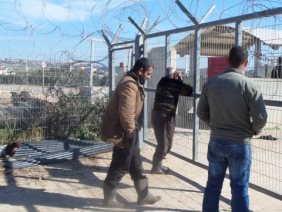 Waiting for the gate to be opened 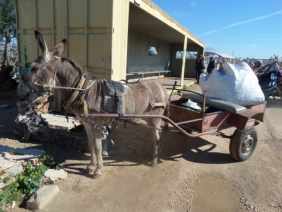 At 13:25 a white Israeli car with civilian plate number arrived and 5 soldiers and an MP came out. A polite woman soldier greeted us and when asked about the delay she replied “because of others”. We didn’t pursue the subject.

We met H the owner of the sheep who were separated from the lambs. The lambs are on the Palestinian side while the sheep are on the Israeli side and he is not allowed to bring them back through the Habla gate. We asked how the sheep survive the terrible cold and he assured us they are well since they are kept in old greenhouses. Today he brought them hay. In spite of the situation and his understandable anger, he is cheerful and gave us a standup show, with the donkey accompanying him with braying. The donkey’s name (same as all his donkeys)is Ishab, named after the Iranian missile Ishab.

We then went to E’s nursery for another interesting and instructive chat while having herbal tea.