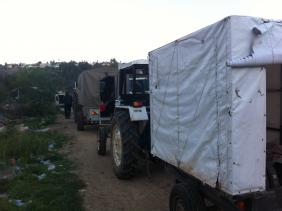 06:00 - Gate 839 (Sal'it)  We met Jamal, and with him went down to the checkpoint. There were about 15 tractors, each with a carriage loaded with workers headed to the industrial area and farmers on their way to tend their plots across the fence.  We waited a half hour for the gate to open.  All along the route workers crowded around little bonfires. They greeted us warmly.

06:30  The gate opened.  A female soldier checked papers, while next to her an officer had his weapon drawn.  He looked at our camera

, unsure how to deal with it.  Each tractor entered in turn, all going down to be checked.

07:15  The gate closes; all have passed through.  The officer asks if I am done photographing.  Anyone arriving later will find a closed gate, although the official closing time is 7:30.

The problems we heard about are:
1.  The farmers would like to have opening hours at noon, but the gate is closed between 7:30 and 16:00.
2.  The gate is often closed before 7:30, so latecomers can't go through.
3.  Sometimes people are trapped between gates

and cannot proceed to their destination.
4.  In general, hours are only approximate, and the uncertainty makes matters difficult.  That's why they come so early in the morning.

07:45  Falma (unnumbered gate).  A sign in Beit Jamal redirected us to Falma. We had to ask how to get there, and reached a closed gate.  We don't know its hours.

08:00 - 10:00  Zawiya gate.
On our way we travelled south through Jamal, Jayyus, Azzun, Kufr Talat, Sinirya, Bidya, Meskha, and under route 5 to Zawiya.  We asked for directions and were sent hither and yon, till finally an electrician from Baladiya guided us by car and on foot through an olive grove.  We walked on a goat path, used, he said, by those wishing to access their olive groves across the fence.  They need to cross route 5, which seems unreasonable, and reach a gate that doesn't look much like a gate.  The other possibility is to use the passage from their villlage toward Meskha, under route 5, and take a left for about 700 meters.
I'm not sure all this is accurate, as we couldn't get good directions.  Our guide claimed that the pedestrians are people over 50 who don't need licenses, and carry no equipment.  They transport the olives they pick in bags on their backs.
We walked in the company of two 17-year olds and the 30-year old electrician.  The teenagers expressed great fear of the soldiers, and at some point refused to go on, fearing they'd be beaten by soldiers. Indeed, we were watched by soldiers from afar.  A military jeep seen from a distance alarmed them, but it went by without stopping.
We met people in the village, the grocery store and in the street, and all were welcoming.  They gave us flowers, and made us their Facebook friends. We exchanged phone numbers, and  they said they would notify us of any irregularities. 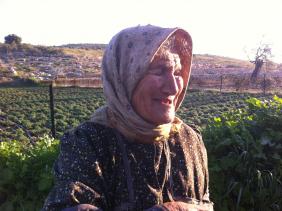 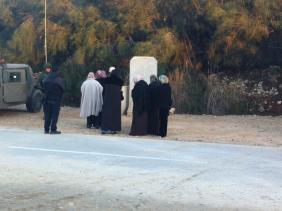 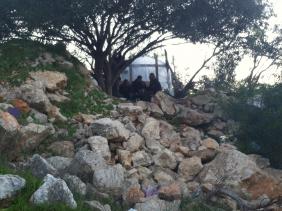