Pursuit of Palestinians in the Oranit area; the long journey of villagers in the region to their lands near Oranit; the Habla checkpoint routine

12:10  A military vehicle by the roadside before Oranit.  Two soldiers with drawn weapons chase five Palestinians holding plastic bags, running toward the fields.  We turn right toward the security road.  On the steps next to the wall, at Gate 1473, a young man gives instructions on a cellphone to the pursued, over the phone and shouting as well. 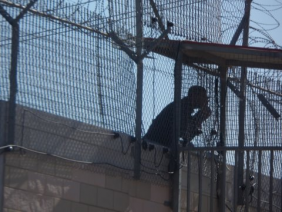 We continue toward Checkpoint 1447.  An elderly couple with a tractor and spraying equipment waits for the gate to open, along with a lad with a small wagon hitched to a donkey.  They’ve finished working in the fields and have been waiting a long time for the gate to open.

The couple has ten children; they live in Siniriyya.

Together they sprayed their vegetable plots; in two weeks they’ll plow and sow.

Forty-eight dunums in the Oranit region, between the town and the school, were stolen from them.  Residents of Oranit offered to purchase the land but they won’t give it up for all the money in the world.  “They could give me a million dollars per centimeter – I wouldn’t take it,” he says.  “It belongs to me and my wife.”  The woman looks at the walls and asks, “Who needs it?  Why is there a fence?”

Muhammad, the donkey’s owner, stands beside them.  His family has 18 dunums of za’atar; he and his father have crossing permits.

Two more youths join us.  We ask their age; all say they’re 18 though they appear much younger.  They’ve all come from working in their families’ fields.  One is from ‘Azzun ‘Atma and pruned his olive grove.  Only he and his mother have crossing permits.  His father works in Rosh Ha’ayin.

12:47  The military jeep arrived and the soldiers got organized – the soldiers move toward the checkpoint and the female MP with a laptop begins checking the Palestinians exiting.  Six left and six entered.  The unit paid no attention to us, for a change, and didn’t ask us to move away.

N., who’s 38, approaches us.  He lives in ‘Azzun ‘Atma, in his mother’s house.  His wife of 17 years and the mother of his three children lives in Jordan and he isn’t able to obtain an entry permit to the West Bank for her.  He travels every three months to visit her in Jordan.   His own house will remain closed until he’s able to bring his wife and children. N. walks three kilometers from his mother’s house to the gate, and four additional kilometers from the gate to his land past Oranit.  In the evening he walks seven kilometers in return.  Every single day.

He has land near Sha’arei Tiqwa.  He’s says there’s a gate there that’s always closed (we should check that).  During the olive harvest they were promised the gate would open to make it easier to reach their grove, but the promise wasn’t kept.

13:00  The gate closes and the staff leaves for Habla via the security road.  We drive via Israel.

The jeep is still parked before Oranit.  Our forces return from the field with three young Palestinians.  Were they in Israel illegally?  May God help them…

13:30  Habla.  The gate opens on time.  Two military vehicles and reinforcements on the security road.

A pickup truck with lumber, a horse and cart and four cars exit – each is inspected carefully.  The plant nursery truck is laden with seedlings.

M., a teacher from ‘Arab a-Ramadin, waits with us.  He speaks Hebrew.  He tells us he’s the one who opened the school in his locality, first in a tent and then in a permanent structure.  His house is relatively isolated, near Highway 55, and only he has no electricity.  The mayor of Qalqilya gave him solar panels, but they don’t provide enough hot water.  He gets water through a plastic pipe.  When the road was built four dunums were stolen from him.  He has 12 left, on both sides of the road.  He’s waiting for a water engineer who’s coming from Qalqilya.

14:10  Eliyahu crossing.  Four large vans on the road before the turn to the inspection station, apparently belonging to Israeli security forces.  No cars in the parking lot on the way back.

14:35  No military vehicle at the entrance to ‘Azzun.  We stopped at the shop.  A. says it’s been quiet lately.  Things have calmed down.  The soldiers don’t come, so there’s no stone-throwing.

15:00  We visit the plant nursery.  A. says business is down 90%.  Palestinians and Israelis feel threatened.  Your life is in danger.  You can’t depend on the Palestinian leadership or on the Israeli leadership – they care only about money.