It’s a system of psychological terror implemented every hour of every day.

Her name is Huda, she’s forty years old, she lives in Gaza and she’s very sick.

She’s brain-damaged and has a serious heart ailment.

Huda’s muscles are weak; she’s been strapped to the stretched so she doesn’t fall off.  She’s incontinent and has a package of adult diapers.

Huda was brought by ambulance from the Erez crossing to the Qalandiya checkpoint where she was transferred via the back-to-back procedure to another ambulance which took her to Al Najah hospital in Nablus.

Huda’s story is a small, visible portion of the bigger story.  She has a face, and a name, and an illness and a destination, but in the bigger, hidden story there’s no name and no face and no illness.  There’s only the systematic obfuscation of facts.

That same morning, earlier on the day Huda was taken to treatment on the West Bank, Red Crescent headquarters in East Jerusalem was notified that three patients had to be taken from Gaza to hospitals on the West Bank.  An ambulance drove to the Erez crossing and waited.  No one came through.  “Wait,” they were told.  They waited.  “There’s a problem of coordination; keep waiting.”  They kept waiting.  They waited for three hours (Palestinians, even Palestinian ambulance staff, have unlimited time).  Three hours later Huda emerged from the Erez crossing.  The others’ exits hadn’t been coordinated.

Who are those other two, what are their names, what illnesses have they that they weren’t permitted to receive treatment for?

You’re wrong if you think a mistake was made or that the patients recovered during the three hours of waiting.

What’s at issue is the system, the system whose policy is to keep the population in a condition of continuous uncertainty, which is in effect psychological terror imposed daily and hourly for decades on millions without rights.

If you live in Hebron, don’t bother driving along the road.  Residents of Hebron are suspect simply by virtue of living in Hebron.

And when Giv’ati soldiers stationed at the Jaba checkpoint happened to stop a vehicle carrying three Hebron residents they had no doubt they’d struck a mother-lode, or at least one large nugget, because the man in the passenger seat had a black beard, and everyone knows a black beard is proof, particularly when a quick search of the car revealed a bundle of bank notes that hadn’t really been concealed.

The soldiers ordered told them to turn off the engine, hand over their IDs, stay in the vehicle, put the car keys on the roof – “Why?” – “Headquarters,” said Carmel, the commander, and all the information was transmitted immediately to brigade headquarters and from there to the secret service.  “I’m allowed to detain you for four hours, headquarters authorizes it,” said Carmel.

While it may be nobody’s business why and wherefrom someone has a great deal of money, the men volunteered that the money is the revenue from selling clothes manufactured in Hebron and sold to clothing merchants in Ramallah.

The Shabak was in no hurry, it doesn’t work for them, nor did brigade headquarters feel any urgency, “No photographs, it’s a military area…” Carmel, the commander, repeated, “Why?” “Headquarters,” an armored Border Police vehicle also showed up, the Border Police commander also tried the “No photographs” business and “I’ll call the police” (who didn’t show up), meanwhile day became night, the men sat stuck in the car and the soldiers busily received and carried out orders, demanded the phone number of the bearded man, but didn’t simply ask and record but told to call Carmel with that phone and when the bearded man’s phone number had been uploaded to Carmel’s phone and from there transmitted to the Shabak the owner of the phone was ordered to erase the number he had called.  “I erased it,” the man said, but that wasn’t enough for Carmel who checked and confirmed that it had in fact been deleted. 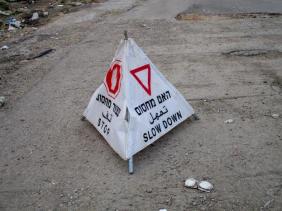 After more time had passed the soldiers approached the car windows and ordered the bearded man to give them his Facebook account (invasion of privacy isn’t considered an invasion at all), he did so, the soldiers checked, transmitted it to the Shabak and another immeasurable amount of time passed.

At the end of the day, after two nerve-wracking hours, in the presence of two Jewish women and one camera

, when it turned out they had nothing on them, their IDs were returned and the road opened before them.

As of now, the following day – Monday evening – they haven’t been harassed and nobody telephoned them.  For now – I confirmed that by phone.