Saturday evening, a little past 8 p.m., a man was executed at Qalandiya Checkpoint. Various websites reported that the man, inhabitant of Qatana village, took knives out of his pocket, tried to stab a policeman and was shot. I don’t know what happened at the checkpoint on Saturday evening, I can only repeat what I was told by my acquaintances.

They said a drunk man entered the checkpoint, shouted, raised a racket and got out. Then this guy entered the checkpoint, the guy who was killed. He was on his way to work on a night-shift at Atarot Industrial Zone, and had an entry permit. On the track before the soldiers’ checking posts, a policeman and a security guard came towards him, they actually came because of the drunken man, and while out there, they fired ten bullets at him.

I don’t know what happened there on Saturday evening, I am just positive that anyone familiar with the checkpoint and its procedures, this sterile

labyrinth, could not possibly believe that the fellow who was killed had the slightest chance to meet a soldier or policeman face-to-face, or that he could possibly pass the metal detector with a knife in his pocket. And I do know that someone was shot and bled to death in this place.

Another chapter of a book that will not be written about the banality of occupation: 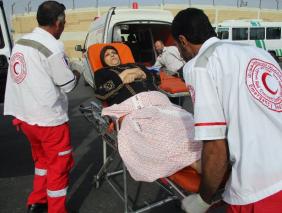 A woman inhabitant of the Gaza Strip suffering from myocardial infarction was brought to Qalandiya Checkpoint in a Red Crescent ambulance and transferred in a back-to-back procedure to a Palestinian ambulance there that took her to a Nablus hospital. The medical crew member who brought the woman to the checkpoint from Erez Checkpoint said he was equipped with a resuscitation kit because “she could go any moment now…”, and also that the West Bank ambulance has such equipment.

“Why did they not send her in an Intensive Care ambulance?” asked a bus driver who was there.
“She’s from Gaza”.
“Ah, yes, Gaza… They really don’t deserve it…” he concluded with a bitter smile.
Apparently most procedures totally confuse the soldiers. Even if one does adhere to army logic as to security risks, it is simply not conceivable why the luggage of a woman who was inspected at Erez Checkpoint and crossed the State of Israel and is on her way to Nablus in the West Bank – should be re-inspected. 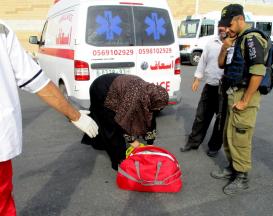 At a roadblock below Jab’a village soldiers below and soldiers above disrupted traffic of hundreds of passengers. They stopped vehicles and checked IDs and opened doors and caused a traffic jam as far as one could see to the west. I don’t know if this is “breathing closure

” (as the army calls it) or “breathless closure”, perhaps it is actually some sort of siege. One thing is certain: what the army does when it totally- or half-blocks the entries to Hizma village is torment people. 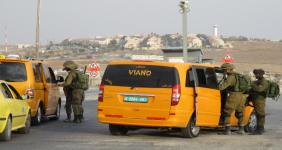 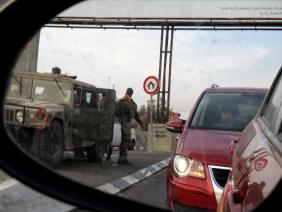 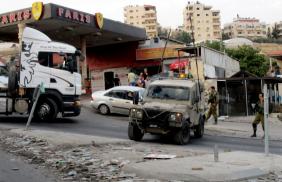 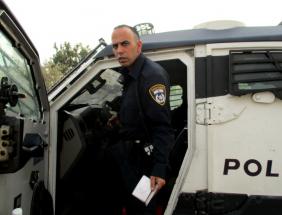 In closing, something personal:

The photo shows the policeman who yelled at me at the entrance to Hizma village and took my ID for a check with the computer inside the armored police van and when he returned it yelled at me once again and said, “if you give the soldiers a hard time I’ll arrest you”.  I did not answer, and did not tell him that because he’s a policeman he can arrest me and he can also implement the new ‘feel-up’ law on me, but what he didn’t know is that half-a-year ago I pressed personal charges against the State for being detained in vain for three hours at Qalandiya Checkpoint. This happened about three years ago (you certainly don’t remember but I can certainly not forget this). The Tel Aviv attorney office ruled that the State should compensate me with a fee of 1000 NIS, and refund me the official fee that I paid for the procedure.

Thanks to attorney Talya Ramati who represented me.