On the banality of the occupation 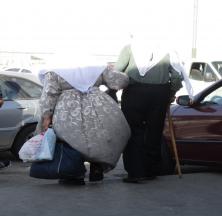 We couldn’t tell whether she supported him or he supported her.  Nor could we tell which of them was ill, him or her.  Perhaps both.

“We need to go to the hospital” they said.

So even though they’d left home with documents and a bag which must have held items you place in the small cabinet next to the hospital bed, and even though he or she or both of them were ill and required treatment, they returned home.

Soldiers in the tower overlooking the refugee camp. 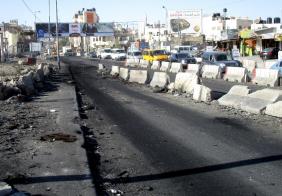 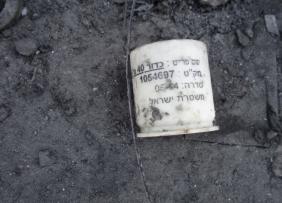 It was good to speak to the people on both sides of the wall.

Now, when the streets are empty and there are no customers in the shops and no one wants a taxi, “It took me only five minutes to drive from here to Ramallah,” said a taxi driver (a trip that usually takes at least half an hour), when no one leaves the house unless they have to, and when someone does go out, and recognizes and trusts the person facing them, they want to talk and are pleased that someone listens, and that’s important.

You hear of much fear, much apprehension, much worry, many stories, much anger and a tremendous amount of hatred.

The air smells of terror, the scent of death.

People pass the time watching clips of teenage boys and girls, and of children, bleeding, motionless, the youths and the boys and the girls who had been “neutralized” and bled and died.

And everyone, literally everyone, is talking about the injury to the Al-Aqsa mosque.

“Even if they’d destroyed the Muqata’a, even if they’d cut off Abu Mazen’s head, it wouldn’t have been as bad as touching Al-Aqsa.”

No one believes (and, to tell the truth, neither do I) that the Jews aren’t trying to harm the mosque and to Moslem sovereignty over the institution.

Police accompanied by military reinforcements arrived at the checkpoint above the village of Jaba.  They stopped taxis, inspected documents, caused a traffic jam and issued traffic tickets.  Many tickets, for not wearing seatbelts. 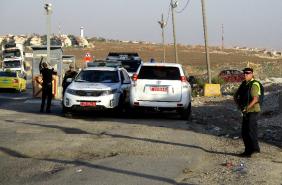 All this on the day the Acting Police Commissioner announced that “due to the situation” traffic policemen (who are usually the ones issuing traffic tickets) will be transferred to reinforce security forces at locations vulnerable to terror attacks.