The fact that Ahmad is held in Ofer (detention/prison facility) hit me a week ago, and I was angry.

I was angry that it hit me, angry that it shocked me. Angry that because of this shock I was struck dumb and asked no questions. Angry because I assumed I was immune and angry that I’m not. 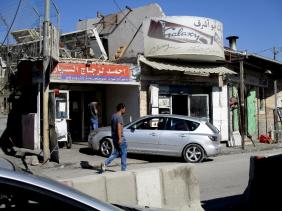 So I came in order to ask. And I asked, and people told me what they know.

They said Ahmad got a phone call, and was told to come to the checkpoint, because if he wouldn’t, they would come to him. So Ahmad went to the checkpoint and later called and said he was being taken to Ofer.

That’s it. Since then – nothing. Ten days without any information, no idea. 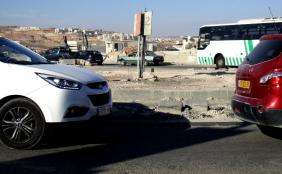 The roundabout west of the checkpoint is being renovated at the cost of the Palestinian Authority.

“Can’t tell how long it will take and what is going to happen. Because our government in Ramallah is a government of thieves who take all the money into their own pocket and do nothing for the people. Not like your government. In Israel, if someone high up steals, he is arrested. Here, maybe 90% of the people think so.”