We went to see at what hour the gate at the Abu Salam checkpoint open in the morning.

We arrived at the Oranit gate (which wasn’t open) at 05:45 and from there we continued left along the wall, but we didn’t know how to estimate the distance to theAbu Salam gate.  A car  transporting workers to the junction stopped next to us. From them we heard of two gates

According to the workers, Gate 1449 opens at 05:55 but Gate 1447 opens only at 08:00. Farmers request that Gate 1447 be opened earlier in the morning. Because it wasn’t clear to us exactly where the two gates were, we decided to return another morning and check and then approach the command center.

We hurried to Habla.

The staff of the checkpoint arrives and even before the opening, the military police, highly motivated, notice my camera

and demand that I stop photographing, and present my identity card. Their tone was angry and authoritarian.  The military police serve in the name of security.  I give over my driver’s license but refuse to stop photographing because there is no sign that says it is forbidden to photograph. An argument ensues.  An armed soldier participates and uses cheap and shocking language.  He threatens to take my camera by force and break it.  Because they were delaying the opening of the checkpoint, we decided to keep quiet.

07:25 – We say good bye to Hanna and Ruthie and continue to Azun.  As we entered there are no army vehicles, but when we left there was a police vehicle at the entrance.

We left some packages next to Z.’s store, which was still closed, made a few purchases, and return to Tel Aviv. 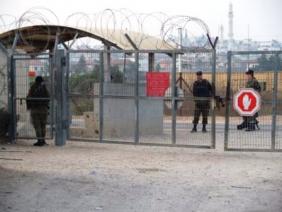 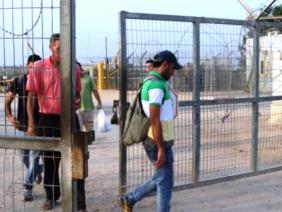 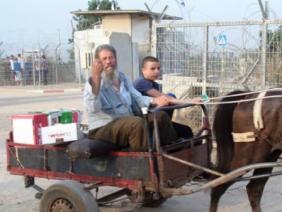