04:45 – 08:15: The Parking lot is closed and as a result even in this early hour of the morning, the traffic in the whole area is absolutely chaotic. One has to park at a considerable distance, and the pedestrians squeeze their way through the moving cars – a real danger. The queue is long and reaches the end of the parking lot. All along the shift 4 checking posts were open. In the aquarium there is on soldier playing different games on the computer. His eyes are fixed on the ninjas which win or lose on the screen, and the people standing in the queue are forced to whistle or scream in order that the turnstiles be opened. A policeman appeared. 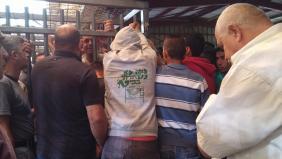 From that moment on the command moved to his hands and it has to be said in his favour that he tried to organize the activity – although he did this rather harshly. The queue became longer and longer and the patience decreased gradually. At 05:10 I found a man in a red shirt who stood at the end of the queue and waited for him to enter the checking post – an hour and ten minutes. I couldn't see when he came out of the final checking. Immediately upon my arrival I heard the girl-soldiers shouting in the checking post. Most of it in basic Arabic (a man translated for me) but in Hebrew too. One girl soldier (in sleeve

no. 5) decided that one of the Palestinians violated the occupation "regulations", and that she wouldn't let him pass. "You will not pass!" 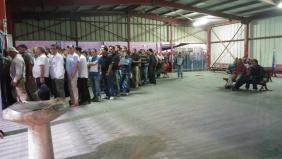 she screamed shrilly. The man answered her – and the policeman sent him back to waste another hour at least in the queue.  In the meantime riots began at the entrance to the "cages", people  leaped one on the other, shoved and pushed – and there were screams that reached the sky. The authorities and surely many others will explain this by "they are animals

"   and I say that when people are degraded and abused, day after day, when one is anxious to decompose a society, and turn each person against the other, this is what happens. Always when I am an observer at the Checkpoints I am ashamed, as after all this is done, indirectly, in my name too, me being a citizen of this state – but today I wanted to hide myself in the ground!

At 06:00 the DCO officer arrived. There was already a considerable queue at the "humanitarian" queue. What is humanitarian there I have not yet grasped, in spite of 15 years at the  checkpoints, but perhaps I will still understand. He thoroughly checked who is entitled and who isn't to "enjoy" passing at the "humanitarian" gate and opened it. Many people did not pass – and when I asked why I heard – what was already pointed out in the past – that now during the Ramadan many authorisations were given and those are valid only from eight o'clock on, while the people arrive earlier and this causes havoc. And I, in my simplemindedness assumed that whoever knows how to activate planes and missiles and tanks and other instruments of mass destruction of all kinds and colours, would also know how to plan and activate the checkpoints so that the shameful scenes I witnessed today wouldn't happen. There are solutions – even simple ones – what is needed is a bit of resourcefulness and much goodwill. These are all those people who were "a security risk" – even a "high security risk" and now? On Friday there are OK and on Sunday they were stung by the "risk fly"? Until I left sheepish and frustrated at 08:15 the queue still went on and on and on – a long, winding snake.

I cried a bit, I almost got killed on the road and returned to my comfortable life and my sweet granddaughter. Behind me I left a different world – of "the most moral and enlightened" humiliation, arbitrariness and occupation.

The toilets were in use – only the ones for men, those intended for women are absolutely impossible. The stench that comes from there soars high into heaven. The dirt, as always, is disgusting.

Qalandiya at its best!

At a certain stage a policewoman appeared and tried to "educate" me. There was an exchange of words, but I decided to forsake the last word. A woman who talks and behaves as she does, doesn't deserve to be a policewoman. Another point of discredit for the Israeli Police. At second thought, perhaps such a type "is adequate" for the Palestinians, who, after all "are not considered as human beings" – who knows!