07:00 We had 2 missions: to bring some things to our friend Z. from Azzun for his shop, and to observe the Separation Wall and its 2 gates

next to Ornit and Nirit, from the Palestinian side.

We arrived at Azzun from the PAlestinian side, and not from route 55, as usual.  We passed through Bidya, Snirya, and Tolth el Azzun.  The roads are confusing, and lacking road signs,  But whenever we felt lost, friendly locals came to the rescue, and showed us the way.  Zץ's shop is still closed, like the businesses around him.  It is Ramadan and customers are scarce in the stores.  Indeed, most of the places we passed seemed like ghost towns, either because of Ramadan, ir due to the early hour. 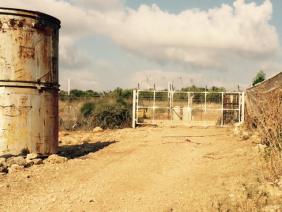 On our way back we pass through Hirbet el Ashkar and Hirbet el Modowar, heading towards Hirbet Abu Slaman and Izbet Jaloud.  The gates are presently closed, but near Jaloud we encounter a friendly Paeltinian accompnaied by a woman in traditional dress.  He is watering some flowers he had planted next to a small hut, bearing a sign which reads"overseas".  The man says he works for this company, which distributes organic vegetables.  They are planting a small grove there, as well as other vegetables, such as the special cucumber he treated us to. The man said that the gate usually opens at 5:30  AM, but today it was very late in opening.  It next opens at 4:30 pm, relatively early for ending a workday. The other gate, to the north, is not open for civilians at all -- only for the military. 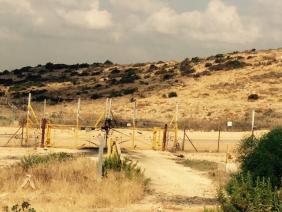 The gate near Nirit, Abu Slaman, is closed, but there is some traffic around it.  Some vehicles are parked, perhaps waiting for it to open at some point.  We could approach the gate itself, but from a distance saw that it faces the prosperous houses of Ornit.  We wondered how the Palestinian laborers who built those houses feelt about it.

On our way back we pass through the Barkan Industrial zone, and catch a view of the sewage treatment facility.  We discover the origin of the waterfall that runs into route 5.  A pipe runs from the facility downhill, and the sewage flows to the main road and then along its side in the direction of Brukhin and A-Dik.  The stench is unbearable.  This is not treated water, it's downright contaminated.