About a year ago Karin and Nina went to the separation fence checkpoints north of Tulkarm, near the Zemer municipal council (cf. their report from 14.5.14: http://www.machsomwatch.org/reports/checkpoints/14/05/2014/afternoon/26094).

Here’s a map of the area:

Reading last year’s report, it appears that nothing has changed! 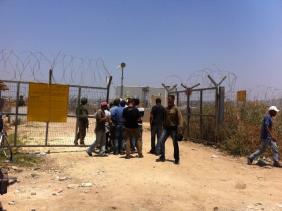 True, a farmer from Deir el-Ghusun can get to his olive grove, next to the Athil checkpoint, via that checkpoint, and his two brothers have permits to access their vineyards via Checkpoint 623, Deir el-Ghusun, which is close to them, but it opens irregularly in the mornings.  Today, for example, we were told by the people waiting, the checkpoint opened only at 08:30 (!).  Then it closed and again reopened.  While we were speaking with people who were going home through the checkpoint (including a woman who lives in Zeita), the soldiers arrived at 12:55.

“The fence hurts.  It’s not freedom,” says G., one of those whose land is penned between the fence and the Green Line.  The fence also separates members of the same family, as we’re told by a resident of Zemer.  Does people’s social existence determine their consciousness?  “We’ve gotten used to the fence,” G. says…  But the occupier’s domination, its arbitrariness, the randomness of its rule over its subjects, undermines daily lives and represents a daily threat.  An example is the instruction by the Civil Administration’s representative to open the Deir el-Ghusun checkpoint only three times a week instead of every day, as it had been until now.  Another example is opening the checkpoint during the summer at an hour when the sun is already high and it’s very hot.

We drove to ‘Azzun via the Eyal checkpoint and Tzufin.  At 14:30 there were soldiers at the turnoff to ‘Azzun from Highway 55.  They were still there twenty minutes later.

And had our car not borne Israeli license plates there would probably have been a news headline reporting on a vehicle that attempted to break through the Sha’ar Eliyahu checkpoint and its driver and passengers….