In the Catholic Monastery in Abu Dis there is a kindergarten in which grave threats to Israeli security lurk -- see photos.

We arrived late, and only few were crossing. The workers had crossed around 6 a.m., and only a few pupils crossed now. In a previous report, Michaela, Daniella and Avital noted a trend of decreasing numbers of pupils crossing to schools in Jerusalem. This deserves a deeper inquiry.
Silwan, Ras-al-Amud, Cliff Hotel
We passed by the elementary school for girls, and heard from residents that border-policemen harass and check pupils. The guard at the gate, as well as parents at the site, said that there is no B.P. presence around the school itself, but that the checks occur on the main road called Ma'alot Ir David. (Have you noticed that on Google maps of East Jerusalem you find mostly Hebraized names of streets, and many neighbourhoods simply do not indicate street names, or institutions or important sites?)
We drove to the ruined Cliff Hotel.  The Wall abuts directly on its northern and eastern sides, so that there is no chance of its ever being restored for touristic use.
The kindergarten of the Catholic Monastery Sisters of Nigrizia near the Lazarus Crossing (close to the former Pishpash) in Abu Dis: 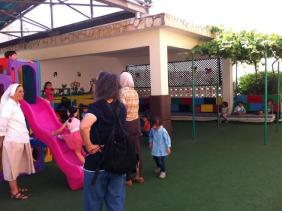 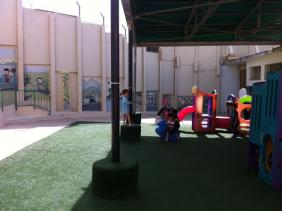 We have not visited this kindergarten for about a year now, but would occasionally meet the teacher at Olive Terminal with a decreasing number of children whom she shepherded through the checkpoint from Al Ezariya into the kindergarten, and then back...  This year there are no longer any children from Al Ezariya, all are from the "Jerusalem" section.  We were welcomed cheerfully.  The teachers told us that the wall on the border of the playground is a source of friction. Despite its height and the barbed wire on top, some people still try to climb over it.  But even when they don't, some electronic device nearby goes off and soldiers with cocked guns arrive to search the kindergarten teeming with children.  They inspect the rest-rooms and warn the teachers that if someone who has passed through is caught, it will be their responsibility.  The frightened children plead with the teachers to search every morning for someone hiding in their kindergarten, lest the armed soldiers return.  We asked the teachers to film soldiers who turn up, and place the film on YouTube (not on our site.)
Another shocking story: The teachers point to one of the children and tell that about two weeks ago soldiers were in the kindergarten and this child (apparently 4 years old) sang a song about the Palestinian homeland.  His mother got a phone call summoning her and the child to the Russian Compound for an interrogation.  Fortunately the mother told them she would come only if handed a signed order. Not clear if this was a soldier's private enterprise, or came from the commanding echelons. We asked the teachers, if such events should recur, to let us know immediately to enable us to check this out on the same day and lodge a complaint.
A-Tur
At this hour (one day before the last event of a car running over bystanders) it was calm and no soldiers in sight -- not in the little park at the end of the road, nor opposite the High School.  A B.P. van at the junction at the top of Wadi Joz parked there, as usual.

Abu Dis, Wadi Naar, Tuesday, May 17th, 2011 p.m.
Observers: Chana G., Julia W., Rahel W. reporting
Traffic moved quickly and without incident at Wadi Naar.
However, there have been several changes in traffic conditions which could affect our teams.
The road from Qedar to Wadi Naar is marked as one way -- in the direction from Wadi Naar to Qedar.  (We travelled this road, against the arrows without incident, but this could change).
At the Wadi Naar intersection, there are new signs pointing to Ramallah and Abu Dis from Wadi Naar toward the Qedar intersection.  However, the road was blocked!!! so the signs indicated travel that could not happen.
Also, the road from Wadi Naar toward Azariah had a new sign indicating that traffic was allowed only from Azariah toward Wadi Naar.  (Vehicles continued to travel in both directions while we were there).
Finally, a new building has been under construction south of the checkpoint.  Perhaps this will become a permanent crossing area like A Zeitun and Qalandiya, even though this would be constructed right in the middle of two Palestinian areas.  Who knows?
There was a large group of workers returning when we were there and vans lined up to take them to their destinations.
Once again, a quiet, uneventful shift.

Silwan is south of the Old City of Jerusalem and has become one of the main confrontation areas with settlers.

Construction of the wall in the Abu Dis area blocked all the gaps that allowed people to cross from al-Ezariya to the neighbourhoods of Abu Dis and Ras al 'Amud that are located within Jerusalem’s municipal boundary. The Lazarus checkpoint is a gate in the wall adjacent to the Lazarus Monastery. Until 2011 it had a door for pilgrims to al-Ezariya and for the monastery’s kindergarten pupils from al-Ezariya. The crossing is currently closed, but the site has infrastructure for conducting inspections.