We arrived at 8.40. The parking lot is full of people, dozens of buses bringing tourists. We find a parking place behind the yard. When we return, there will be many cars parking there and a young man will approach us and demand that we pay him for the parking. He says that this is private property and only thanks to his intervention our car was not damaged. A woman standing near him tells us that he is a liar and a thief… but we contributed something to the local enterprise. 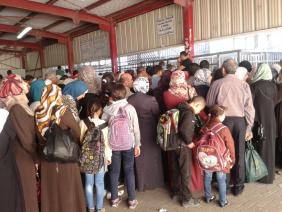 Dozens of people stand crowded in all the queues; also  at the humanitarian gate which is closed at present. 900 first call to the DCO. Yes, they are aware of the situation. We see military activity opposite the gate. They are preparing to open it. In the area behind the fences soldiers and officers of  various ranks are communicating with each other on the phone, but there are so many people crowding near the fences that there is no chance of being able to reach them. The humanitarian gate is opened. 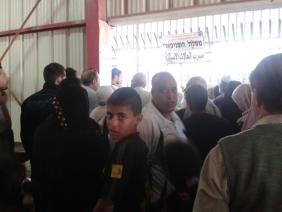 The density is terrible, unlike the situation in the sleeves, here people must push from all sides in order to come near the gate, from above as well. Today men over fifty, women over 45, and many groups going on trips including children and babies,  received  licenses to pass. The place is not organized to cope with such a mass of people.

In the announcement they inform the people that for now only the  elderly are  allowed to pass through the humanitarian barrier and until all the others leave the entrance to the gate, the gate will be closed…education Kalandia style. Of course nobody volunteers to leave the square centimeter which he has succeeded to  appropriate for  himself on the way to the crossing. Because of the commotion and the crowds, people with work licenses do not manage to cross the barrier and 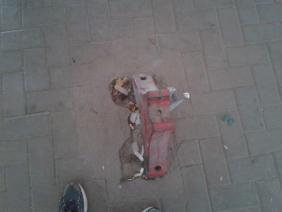 complain. Fathers, mothers and little children push and try to get into all the queues. Knocks on the tin roofs of the humanitarian barrier add to the general hysteria and distress in the stinking space.

The density persists despite the energetic activity of the soldiers. Orders announced on the loudspeaker concerning those entitled to pass, are changed from time to time.

When we leave at 11.10  it is still crowded. At the car crossing nobody bothers us. Ania tells us about the years of curfew that the Soviets imposed on the Poles (by means of the Polish Communist regime) in the eighties, perhaps  to encourage us.