We went to see when the Oranit and Habla agricultural gates

are opened  and closed in the , after receiving many complaints that they are opened late.

12:15  We arrived at Oranit junction and decided to see what the separation wall looked like near Elkanah, but we got stuck in a traffic jam, a line of cars which wasn’t moving.  After a few minutes, so as not to miss the 12:30 opening of the Oranit gate, we left the line and drove toward the checkpoint.

Trucks and tractors work on a lot by the roadside before the checkpoint.  When we come near the gate we see two Palestinians sweeping the asphalt road by the gate and moving south.

The sealed steel door in the high wall is very impressive.  Three Palestinians, residents of ‘Azzun ‘Atma, wait in the shade for it to open.

One complains that despite his permit the army doesn’t allow him to bring his flock through to his land near the gate; he asked us to speak to the DCL.  The soldier in the DCL operations room transfers us to an officer who tells us emphatically than flocks can no longer go through the checkpoint, and rather than explain refers the Palestinian to the Palestinian DCL.  He says the Palestinian DCL claims they have no one to talk to, the Israelis don’t listen to them and that’s why he asks for our help.  We could only tell him to try to speak to them again.

His colleague complains it’s hard for him to reach this gate, about three kilometers from his land,  which is  a five minute walk from the Beit Amin gate, which no longer opens.  Today he has a tractor, but on other days he must walk, and wants the Beit Amin checkpoint to be reopened, and his permit is, in fact, for Beit Amin, No. 1447 (I assume that’s the northern ‘Azzun ‘Atma checkpoint).  There are many other farmers like him, about 40, who grow za’atar (hyssop) and other crops and they’re accustomed to using that gate to reach their fields nearby.

Nothing happens.  We approach to ask why it isn’t open.  “We don’t have to answer you,” but the soldiers eventually say they have no key and it’s also not their job, but  the police’s (MPs).

12:40  A few more farmers arrive, some on foot and another one on a small tractor.

12:54  The longed-for vehicle arrives, a white car with civilian license plates, from which a few MPs emerge.  One refuses to answer our question about when the gate is supposed to open. 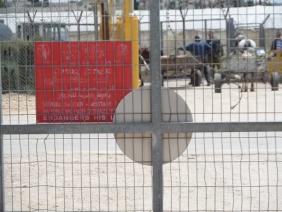 They don’t explain their tardiness to us.  During the next five minutes the terrifying metal gate opens and closes, slides aside each time according to the width of the vehicle crossing.  From ‘Azzun ‘Atma come a truck, a large tractor, a few people on foot,and two youths with donkeys.

13:00  Everyone has gone through, in both directions. The car has driven north – five minutes at the gate – the army is becoming more efficient, at the Palestinians’ expense.

The gate is already open.  Many large vehicles are going through, primarily from Habla toward the plant nurseries.  Some horses also cross, a few hitched to carts.

The pump room is closed.

13:45  We left toward ‘Azzun for our usual visit with Z., who wasn’t feeling well.  We left the many items we brought at the shop with two of his sons.

We went through quickly.  We didn’t see any detained cars.