We entered through the Tarqumiyya checkpoint.  The routine is quiet.

Nothing unusual along Highways 35 and 60.

At the Cave of the Patriarchs – many visitors and tourists.  H., our acquaintance, is there with a tour of Israeli and Palestinian DCL staff and tells me over the phone of complaints about a tunnel being dug under Beit Gutnick.  We weren’t able to meet with him.

Next week we must see what’s happening there.

‘Abed, who owns the souvenir shop, shows me the room he renovated adjacent to his store as a small lecture hall for M., his son, who speaks fluent English and talks there with tourists.  When we arrived he was there with a tour group.

We drove to visit the A. family who live on the road up to Tel Rumeida.

For years they’ve been suffering harassment by settlers, their children and soldiers.

They belong to a local organization of volunteers who photograph, document and provide material to B’Tselem. 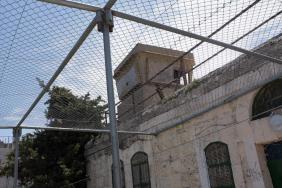 We saw many film clips of friction with soldiers and settlers.

Last Friday their 16 year old son was arrested for the sixth time during the past two years.  A settler’s child had a tiff with him, the soldiers say he threw stones.  He was held for a day at the Hebron police station and released the next day after being fined NIS 500.

His father says that during one of this year’s snowy days the children were playing in the snow by the side of the road.  Settlers’ children arrived, tried to chase them away, and one stabbed his son on the arm.  The boy called to the soldier standing near but he ignored him. 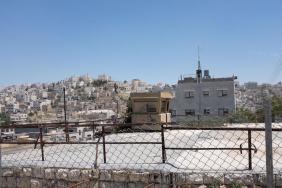 The parents wanted to call the police but instead the soldier’s commander came with a military doctor who bandaged the boy.

The parents took him to the Hebron hospital where they had to sew up the wound.

The soldier, who was asked by the commander whether he saw what happened, said he hadn’t.

The next day, when the boy was home because of the injury, soldiers came and said they’re arresting him for throwing stones at soldiers yesterday.  He was returned home three hours later.  A classic “cover your ass” story.

We also met his 17 year old daughter.  She says soldiers repeatedly detain her.

We went out to the courtyard.

A large metal netting is stretched between the roofs, stones lying on it.  “That’s why we installed it,” says the father.

The house is lower than the road; the roof is visible from the road, a permanent emplacement on it.  “My roof is a closed military area; I’m not allowed on it,” says the father.

The emplacement is manned on Friday and Saturday and on special occasions.

“Until a few days ago,” he adds, “there were water tanks on the roof.”  All the city’s residents have them, because they don’t have running water every day.  Suddenly police arrived and told him he must pour out the water because settlers poisoned it.  So he did, and now the tanks are lying on the ground.

It should be noted that on the other side of the road, on the roof of another building, is one of the many cameras that have been installed throughout this city.  But the army decides what it sees and what it doesn’t.

At the Pharmacy checkpoint the soldiers detain a young man who appears to be arguing with them.  Suddenly they tell him to enter their compound to be checked.

It’s lucky we were there.  The soldiers see us and after a short inspection he’s released.  It doesn’t seem to me it would have ended that way had we not been there.  The man comes near; from his expression and posture he appears retarded.

Why should they detain such a person?

A convoy of military vehicles comes toward us from H1.  The soldiers look at us but for some reason choose to speak to the foreigners next to us, with feigned kindness, offering them cold water.  The foreigners don’t understand what the soldiers want and smile in embarrassment.  The smile turns to hearty laughter when I translate what the commander said.

Hebron: Police car at the entrance to the city under the Givat HaAvot neighborhood

Near Road 317, by the village of Diragat, people are working in a field.