The visit to Jurish exemplified again the importance of ongoing contact with women in the villages, both because of the relationships and trust which develop and the opportunity to become familiar with the area and learn about the problems specific to each village and region.

We learned in Madama that harassment by the settlers and the army is a daily occurrence.  We understood from our hosts that we should come frequently, particularly in the morning and later in the afternoon, to observe the flying checkpoints and inspections at the entrance to the village, apparently in connection with expansion of the settlement called Sela, near Beracha.

A kidnapping of a Palestinian from Madama by an armed soldier was averted.  The army views the incident seriously; the soldier was charged and tried.  We should follow up to see whether he’s punished.

The village children are cute.  They seldom see unarmed Israelis or those who harass them.  They think “monkeys” live in occupied Tel Aviv…

We have to go through Qusra on the way to Jurish.  The direct routes are blocked.  In the large village we can see schools, businesses and homes and well as a few big, elaborate “palaces” built by residents of Qusra who live in the Gulf countries and in the US.  One person owns gas stations and supermarkets in the US.

11:15  We reach Jurish.  A., the coordinator, and a few other women were there at the end of their shift in the successful food program for six schools in Jurish and Qusra.  As usual, the site with the cooking and baking equipment is gleaming, the women are energetic, welcoming and very committed to the business they established.  When we arrived they were busy counting the hundreds of one- and two-shekel coins the children pay for the meal.

Shosh told A. what preparations were required for the beach day.  As usual, they were very enthusiastic.  But A. worried the trip to Tel Aviv might be dangerous for the women and children.  Dalya said there was no danger, and told them many Israelis are also afraid, unnecessarily, to go to the West Bank.  A. responded, amazed:  “How could Jews be afraid?  They’re with us every day and every night…”  Only a few days ago soldiers came to a distant part of the village, near the main road, and uprooted many olive trees.

We agreed that A. will be in direct contact with Rachel as the beach day approaches.

Nirit raised with A. and her colleagues the idea of establishing an internet site to market the handicrafts made by some village women, who want very much to sell them.  Doing so could bypass difficulties the occupation imposes on traditional marketing efforts.  Nirit offered to help them construct the site.  They were very interested, asked questions, noted their apprehensions, and they agreed to think about the idea and we’ll continue to discuss it.

At the same time Pitizi talked with a few women who told her about their lives.  Each home has a garden that the woman takes care of.  They proudly said the village women “do everything” at home and in their yard.  Some of the men work intermittently in Israel.

They say soldiers come to the village at night; they don’t dare come during the day.  They enter the village loudly at night, call people from their homes, but they usually don’t emerge.

We were welcomed warmly, as usual.  They invited us to return soon.  We promised to do so.

12:45  Madama.  We came via Burin.  Madama is a small village with 2,300 residents.  The Yitzhar settlement was established on one side and Beracha on the other.

We met the village secretary at the municipal building; he sat and spoke with us until the head of the council, T., arrived, an energetic, pleasant young man.  He remembered a previous visit to the village by our colleagues.  He told us that Madama suffers a great deal every day from settlers and the army.  The soldiers enter the village by day and by night, almost regularly.  In the morning and afternoons they erect flying checkpoints, particularly under the bridge over Highway 60, and inspect vehicles entering the village.

A new settlement is currently being built next to Beracha – “Sela.”  The settlers are beginning to take over village land and the army establishes more and more checkpoints.

The incident that upset villagers in recent months was an attempt by an armed soldier to kidnap a Palestinian.  The papers report the army views the incident very seriously and the soldier is being tried in court.

The incident began when, a few months ago, an armed soldier stopped a Palestinian who owned a chicken run on a hill in the northwestern part of the village [The chicken run was set on fire by settlers more than a year ago and was recently rebuilt at a cost of half a million shekels, with no compensation, of course, by Israel.  He was also forced to move from his home next to the chicken run to the center of the village because he feared for his children’s lives].  One day he drove toward the center of the village and an armed soldier stopped him, got into the car and told him to take him to Highway 60.  The Palestinian, who feared the soldier would force him to continue to the Beracha settlement and hold him there, and who know what would happen next, turned his vehicle toward the ditch by the roadside and ran off.  To his surprise the soldier also ran away with his weapon.  In the wake of the complaint he submitted to the Palestinian DCL, which was transmitted to the Israeli DCL, he was taken to Yitzhar to view a lineup of suspects.  He identified the soldier, who was arrested.

We were happy to be able to inform the head of the municipality that – according the newspaper – the soldier is currently being brought to trial. 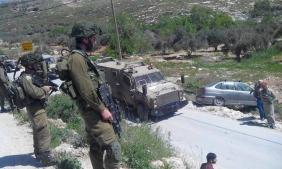 We asked whether we should come now and then to document the operation of the flying checkpoints (which aren’t unexpected) and report on them.  He gladly agreed, and we said we’d be in touch to set another meeting to discuss the idea.

At the conclusion of our meeting, T. enjoyed surprising us by speaking fluent English, and proudly told us about his academic studies.  The entire discussion was in Arabic, with Nadim’s help in translation.  He provides the words and also the cultural context.

While we met with the municipal representatives, Nirit stayed outside talking to dozens of very cute kids who surrounded her, while Nadim kept an eye out to ensure she was alright

The children were surprised and astonished to learn that Nirit was a Jewish woman from Tel Aviv.  They were friendly, curious and excited to receive the MachsomWatch cards she distributed (in lieu of candy).  They explained to her that Tel Aviv is occupied territory, and the Jews living there are “monkeys.”  Adults nearby told them it wasn’t appropriate to talk that way, because the guests who came from Tel Aviv to visit the village are “good women.”  The children wanted to be photographed with her, and proudly showed her their English workbooks.  Some of the adults told us they’d received important assistance from Sylvia and

Tami C. and sent them regards.

On our way out, up the hill toward Highway 60, the army has placed huge boulders blocking most of the road, but which permit one car at a time to carefully make its way through them.

We returned on Highway 55.

an ancient village, of which 62% of the lands were defined after the 1995 agreements as Area B, while the remaining 38% Area C. Israel confiscated 17 dunams of the village's land for the construction of the Israeli Migdalim settlement, in addition to expropriating land for Road 505. In mid-2016, a road was blocked by the IDF (partly paved by the Palestinian Authority) that connected Jurish to Road 505. This is the shortest way to get to Jurish from the main road, without bypassing another 6.5 km through Qusra.

From 2014 to mid-2016, volunteers from the Watch checkpoint in the village held English, yoga and Hebrew classes for girls.

This village is situated in the Nablus district, about 5 kilometers south of the city of Nablus, at an altitude of 517 meters above sea level. Madama was founded 400 years ago and its villagers originate from the Arabian Peninsula. It numbered 1,728 inhabitants in 2007. 62% of the village area is categorized as Area B, and 38% as Area C.

Over the years, hundreds of dunams have been robbed of the village for the purpose of building settler-colonies, army bases, and paving roads:139 dunams were sequestered to found settler-colony Yitzhar south of the village, and the land was also confiscated for paving road 60. The road and its buffer zone (75 meters on each side) lined by barbed wire fences separate the village’s farmlands to the north and the village farmers are denied access to tend them. The road also separates Madama and Bourin, two villages with close neighborly ties, and now not able to access the road directly.

The settler-colony Yitzhar has become a daily threat to the village. The settler-colonists planted trees in fenced-in groves, steal crops, burn, uproot and vandalize Palestinians’ trees, and harm both holy sites and property. They also attack the Palestinian landowners in order to terrorize them and prevent them from accessing their lands.