12.45 At O.'s plant nursery we were advised that the gate would be opened at one fifteen. O. tells us that they changed the hours without notifying them. On the evening before the soldiers closed the gate earlier, according to the new time schedule, and there were people who didn't manage to get in. O. called the Palestinian DCO, reported, shouted at the soldiers. The woman-officer listened and, according to O., feared that he reported on her, so she opened the gate. O. points out that contrary to this incident "there are soldiers we literally fell in love with."

Hereunder are the up to date opening hours of the Habla CP: 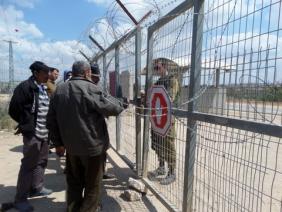 The gate was opened with a 12 minute delay. When we asked for the reason, one of the soldiers answered: "Don't speak to me, I am not obliged to answer you." This time they check the ID cards twice – both the soldiers at the gate and also in the "concrete box". It concerns Palestinians who return home. Before we left the site one of the girl soldiers came after us and said she didn't mind that "we stand in a military area". But we shouldn't take photographs. Such charitableness!

The entrance to the CP – the one which is usually open and nobody minds the people entering, is manned this time by the military police. Two Palestinians were stopped there and the chaos is great. It is not clear why they don't direct them to the side. Later a Palestinian ambulance parks to the right.

At the entrance there is no military presence, whe have experienced this already a few times. We bring our friend Z. clothes for his shop. We eat a good Shwarma meal in a restaurant in Azzun. The owner is friendly, the food tasty, fresh and cheap.

14.40 A visit in the amusement park in the outskirts of Azzun 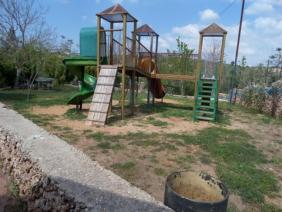 Surprisingly the gate to the park is open, an opportunity to see it once from the inside. K. meets us at the entrance, he is a psychologist who received from the Baladiya of Azzun a franchise to manage the place. He intends cleaning the small pools, those of the children, and to activate them in summer. He shows of where there were big pools which had been destroyed by the army on the opening day. There is no sign of them. Just sand.

The area is spacious, very run down, but with an enormous potential. There are lovely corners, intended for large families who will come to relax. The place is situated on a hillside and a pleasant wind blows there. Even in summer, according to K. Before leaving K. asks for a phone number which he could contact in cases where the army will create problems. We gave him Petahya's number, in the hope he won't be forced to use it. We promised to come again towards summer, after the overhaul. 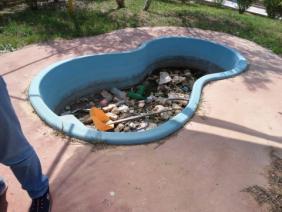 15.00 at the exit from Azzun three soldiers without cars.

We read about the demonstration on the occasion of the Day of the Earth which took place there on the day before. We went to the Knaffe place, to hear from the people about the events. The lads in the shop did not seem too agitated, although they told us that the army forced them to close the place and they also showed us a video piece where soldiers hitting the lads are seen, while those are bringing the chairs and returning them to the shop…

One of the lads tells us that he was released from prison this week after 19 months of imprisonment, where he was beaten too. He shows us (proudly?) the release document. In prison he learned to work on computer, and is now studying at the A-Nagah university. What will he do later? Where will he work?

There is much activity. A vehicle of the military police. They detained three Palestinians. They made them stand facing the fence, and checked the vehicle meticulously.

At the entrance to Marda a milidary jeep is parked. 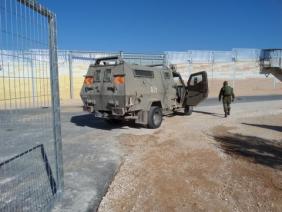 A Palestinian on a bicyle approaches the shut gate. Then another arrives. And a tractor too.

The gate is shut. This is a one piece iron gate, which blocks any possibility of finding out what lies behind it. A armoured military vehicle arrives at the gate. The Palestinian tells us that the gate is intended to be opened at five, and he would have to wait an hour until he would be able to return home. He fears that the soldiers will scold him, but convey the gate on its groove and it transpires, to everybody's surprise, that it is possible to enter. The closed gate – is open!

On the inside of the gate nine (!!!) soldiers sit in the shade, and it was impossible to know about their existence from our side. The soldiers in the vehicle too are surprised to learn that there wasn't any soldier on the entrance side. There is no checking post and there are absolutely no signposts.

The new wall is monstrous. Loads of money were spend there in order to confine behind it an entire village.