10:26  We drive to Hebron.  At the Sham’a settlement we saw preparations for new construction.

10:34  On Highway 60, next to the Othniel settlement, Israeli flags are flying for Memorial Day and the “Independence holiday,” and also to make clear whom the area belongs to.

10:38  Dura al-Fawwar junction, soldiers in the pillbox, repairs underway to the fence.

10:41  The Israeli police lie in wait for traffic offenders at the southern entrance to Hebron.  Another answer to the question, Who benefits from the occupation?

Farther along the road we saw tractors labeled “Mekorot” and “Electric Company.”  Still another answer to the question of who benefits from the occupation.

“Beit Hashalom” is Beit Hameriva; it and the surroundings are being upgraded.  Next to the building is a checkpoint and now structures resembling inspection booths are being constructed and two soldiers are present. 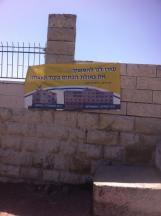 The Cave of the Patriarchs area is crowded with vehicles, in preparation for the Israeli holidays.

An IDF delegation enters the Tarpat Museum on Shuhada Street.

The Police Roadblock checkpoint looks different.  The trailer is sealed and now there’s only a narrow passage, a new guard/observation tower rising above it.  A small sign farther up the street notes it’s called “Tarpat Street.”

The Hazon David synagogue has been demolished, but that doesn’t mean the land has been returned to its owner.  The rubble is still there, testimony to the ongoing injustice for which the Israeli authorities are responsible.