The lines already extended far into the parking lot when we arrived at the Qalandiya checkpoint at 05:05.  The reason:  only one of the five inspection booths was open.  Whatever order the lines possessed quickly vanished and masses of people wandered around in the covered area of the checkpoint with nothing to do.  Some then found a place to pray together, but most just stood, annoyed.  With no cellphone (which had vanished somewhere between the car and the checkpoint), we borrowed one from a person waiting and telephoned the DCL operations office.  We woke the soldier, who didn’t understand what the problem was, and when we asked to speak to his commanding officer, he suddenly understood and said he’d call him and asked us to call him back in five minutes.  Meanwhile we found the lost cellphone (under the car) and again called the operations office.  The answer this time – in its entirety – was that “the checkpoint will open soon.”  It was clear there was no point continuing with them, although we called a third time to ask whether there was an update.  Meanwhile the congestion increased, and we had no answers for the questions.  Some asked us to telephone again, others urged us to photograph the situation (Incidentally, we see that more and more of those waiting have smartphones; we’re not the only ones taking photographs).

The remaining four booths finally opened at 05:40, but it’s unnecessary to note that by then the damage had already been done – in spades!

For example, as soon as the additional booths opened, the battle at the entrance to the cages also began.  Most of the older men and many of the younger ones who also feared being injured if they came near the cages continued to remain far from the “action.”  As in the past, since it’s impossible to vent their anger on those responsible for conditions at the checkpoint, and the contempt displayed toward them, they vent their frustration on each other.  Men younger than 60 also began to gather at the humanitarian gate, hoping (in vain, of course) they’ll be taken pity on and permitted through. 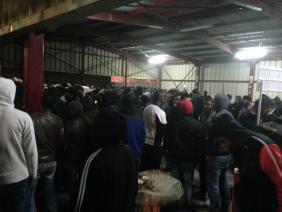 The humanitarian gate opened at 06:15 and two people (one who’d recently undergone an operation on his head and the other with an artificial leg, and with the relevant documents, of course) asked for our help to contact the DCL officer in charge of the gate.  We submitted to him the first request and the second to the policemen who later operated the gate – to no avail.  The policewoman even responded by yelling so loudly I was afraid she’d confiscate the permit of the man with the artificial limb (a merchant), and I recommended he forget about it and try to obtain a permit noting his disability. 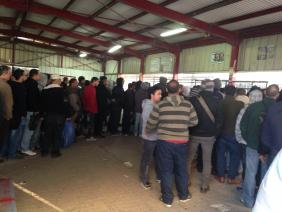 When we left at 07:00 the lines, which had formed in the interim, still stretched to the end of the covered area, and it appeared they’d remain like that for a long time.  We couldn’t time how long it took to go through, on average, because there weren’t any clear lines until slightly before 07:00.  But it was clear to all that the checkpoint’s operation was totally fucked up, and instead of understanding how annoyed those waiting were about the situation that those operating the checkpoint cause, the authorities just got mad at them, as if they – those going through the checkpoint – caused the problem and must be punished for it.