The plaza beyond the courtyard to which people exit from the inspection facility was completely empty when we arrived.  We parked next to the fence near the new shed.  The shed is located more or less opposite this exit, it’s very large and has benches along the walls and a bench dividing the middle.  A parking lot is under construction adjacent to it.

The new entry lanes to the inspection facility

As has already been reported, there’s a new set of lanes instead of the narrow, fenced, crowded and winding lane that led from the Palestinian side to the revolving gates

at the entrance to the inspection facility.  The men enter from the side which isn’t visible to us, where they are directed to three separate lanes divided by translucent panels about two meters high.  These lanes lead to a not-very-large area from which they go through revolving gates to the same courtyard which has been there for a long time and where people line up to enter the same single opening to the inspection facility.

The entire new part of the lanes is covered and lit by many fluorescent lights.

The women exit to the waiting area in a separate line, next to the men’s line, which has more people on it, but all enter the inspection facility through the same opening.

The obstacle course.  Cf. the diagram drawn by one of the laborers and also the photograph. 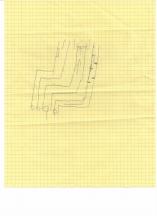 It’s built of double-barred metal frames set alternately on the right and left sides of the lane. 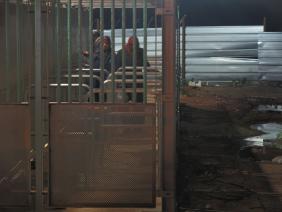 They’re approximately chest-height.  They leave a narrow space to go through.  They force each person to zigzag in order to go through.  We assume the purpose is to slow down greatly entering the lanes and emerging from them.  It’s easy to imagine how, when it’s crowded and people are under pressure, they’ll be pressed against these frames and injured, particularly on their knees and ribs.  One man to whom we spoke called it “a route for goats.”

People told us the crossing went quickly today, overall.  We timed it:  Right after the checkpoint opened it took about ten minutes to go from the entrance to the inspection facility to the exit from the revolving gates on the other side.  Later it was slower.  At 04:30 the exit closed for about four minutes.  From 04:30 to 05:30 it took 14-15 minutes to go through.  People told us that frequently the delay isn’t in the entry lane but in the inspection facility itself, where only three of the four inspection rooms are operating.  There packages are inspected, and sometimes outer garments.  Not all document inspection stations operate during the entire shift.  Early in the morning, for example, only three and then only four were operating.

One person told us soberly that what the new lanes managed to do was push back the crowding and congestion from the entrance to the inspection facility to a location slightly farther back.

The whole route from the exit from the facility almost to the broader area is very dark, which is even more apparent after the festival of lights at the new external lane.  Because of the large white structure under construction beyond a high wall of galvanized metal, the entire area has been made smaller and narrower, and the bathrooms have been moved close to the exit from the inspection facility, right next to the route.

Transportation from the checkpoint to the workplaces

Because there’s no parking lot, all the taxis and other vehicles coming to pick up the laborers crowd into a small portion of the road.  The mixture of pedestrians and vehicles standing everywhere, at every angle, can cause a disaster.

Perhaps due to the weather, which wasn’t raining, we saw many laborers walking toward the main road (a substantial distance).  Unlike Eyal checkpoint, there’s no regular public transportation from Irtach.  The trip to Tel Aviv with the transport available there costs about NIS 25 in one direction!!

We saw two fancy, private buses parked some distance away, and two entered the road to the checkpoint as we left for the main road through Tayibe to Eyal.  Later we learned the buses transported relatives to visit jailed inmates.

One complaint we heard today, which we’ve also heard in the past, relates to how Israeli employers doubly exploit the laborers:  a.  they report fewer working days than they worked in fact, thereby paying less tax and National Insurance payments.  That also reduces the vacation days to which workers are entitled so they receive less vacation pay.

Work permits are issued to employers, not to workers.  Thus, workers are dependent on the employer so they usually won’t dare to complain.  Only when they’re fired with no severance pay, or injured without receiving medical treatment, do they complain, and then their cases must be heard in court.

Regarding the amounts workers must pay their employers, and the amounts the employers are supposed to pay for the work permits, we suggest to check carefully with Kav LaOved before publishing anything, whether a general statement about workers in general or with respect to any specific case.

Most of the laborers had already come through when we arrived at Eyal and were waiting for transportation or on their way to work on public transportation and other vehicles.  When we reached the exit area from the inspection facility the gate leading to the entry area on the Palestinian side, which is usually closed, was open and we walked in.

The lane from the Palestinian side to the Eyal inspection facility has four sections, each  perfectly straight.  A guard with weapon drawn stands in the pillbox overlooking the line.  A narrow shed covers most of the narrow lane to the revolving gate at the entry but it doesn’t cover the portion between the revolving gate and the inner part of the lane to the inspection facility.  The remainder of the lane to the inspection rooms is wide, covered, and walled.  It’s a kind of huge shed with an arched ceiling.  When we were there the space was very, very crowded, and then it emptied almost at once when all the people were pulled into the inspection rooms, and then it filled and became crowded again.

The guards in the guard towers apparently reported our presence in an area Machsom Watch women aren’t normally found, and soon the checkpoint manager appeared with two guards.  We had a conversation during which we learned about plans to renovate Eyal as well.  The plans include changing the lane and covering it completely and constructing a special area for public transportation.  We criticized the new obstacle course at Irtach.  We learned there are plans (maybe?) to bring public transportation also to Irtach.!!

Eyal checkpoint (terminal), which was opened in 2004, is on the Green Line, at the outskirts of Qalqiliya, south of kibbutz Eyal. Only Palestinians with permits to pass to Israel are allowed through. The permits are in the form of magnetic cards. The intention of the army is to hand its operation over to a private company, but until now it is still operated by the army. 4000 people pass through the checkpoint daily. They have to return from work on the same day and only through this checkpoint.