Hebron – remnants of the snow are visible everywhere and the children outside throw snowballs at one another. 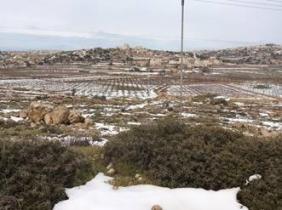 The trees planted in the courtyard of the Cordova School above Shuhada Street, opposite Beit Hadassah, were uprooted in the night between Thursday and Friday, the day of the big storm.  The police and Civil Administration staff come to the school.  They haven’t yet viewed the film from the security cameras.  Tomorrow the Palestinian Authority representative who’s in charge will come and examine the films.  Everyone assumes the settlers who probably did it concealed their faces.  No official complaint was made to the police.  The policemen show A., the school’s custodian, remains of olive trees farther down the street, and another policeman doesn’t allow anyone to approach because they might find traces.  The policeman guarding the remnants of the olive trees asks one of the settlers whether he saw anything and tells him that those who uprooted the seedlings apparently came from Beit Hadassah (that’s what Nili heard).

The plot that was destroyed; the policeman with A., the custodian; remains of olive trees. 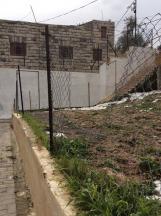 The canopy of the new restaurant below Beit Hameriva has been removed and a bus stop has been added… We run into the Ecumenical peace activist women, they haven’t yet heard about the uprooted seedlings. 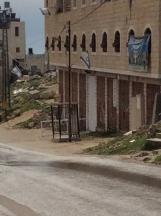 In the morning, at the Dura-al Fawwar junction, we see the following sight: 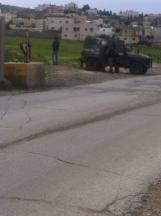 Since the Palestinian turned his back to us we thought we shouldn’t remain if he doesn’t wish us to, and we left.  When we returned he was no longer there and the Border Police soldiers didn’t tell us why he’d been detained.  And again at the junction, at 1 in the afternoon, when children come home from school, IDF soldiers with weapons for dispersing demonstrations are there – but there are no children throwing rocks.

Thirty-six housing units are being added in Sham’a (there’s money for that).  The work proceeds apace. 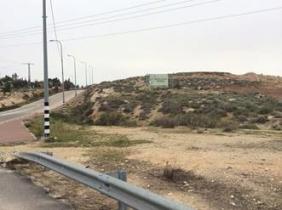