Before the entrance to the checkpoint Rafi, the policeman, and his assistant, whose name I've forgotten, are waiting for their prey.

They are detaining men, only young men, take their ID cards and write down their personal details in order to intimidate them or to "create a feeling of being  persecuted" as they call it in the army.

Or in order to add to the data-base names of potential candidates for meetings in the captain's office?

Maybe in order to implement the occupation policy demanding "to keep the population in a permanent state of uncertainty".

Or, maybe, to catch those who crossed in the morning in search of a few shekels for their families? 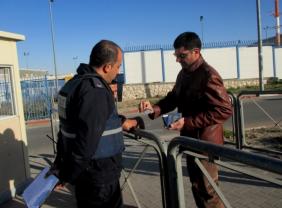 "There was a big mess in the morning", says an acquaintance of mine. A young woman was detained by the soldiers early in the morning, since they suspected her of keeping a fake Israeli ID card. Somebody else explained that those are not news. Things like that happen all the time. And I don't know what happens all the time, suspicions about fake ID cards or attempts to cross with a fake ID card, or maybe, many arrests. 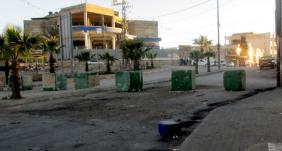 The main entrance to a-Ram has been blocked for at least a week. Nobody enters and nobody leaves. Against international law, collective punishment including tens of thousands of people is being implemented due to the young boys who, every evening, keep throwing stones at army vehicles driving on the main road – road 45 leading from Qalandiya to road 60 towards the Adam junction.

"We take action when they riot" says the commander of the armed and protected soldiers who are posted at the entrance to the Rama base which is located so close to the houses in a-Ram that it seems like a provocation. 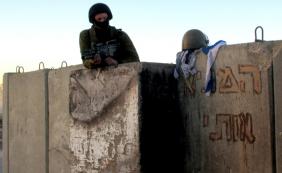 The commander also says that the soldiers retaliate with tear gas since the "riots" (his words) might spread and cause harm in the Adam settlement. 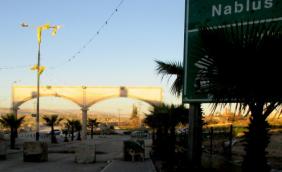 Green-painted concrete barriers mark the line that cannot be crossed. Except for a lonely dog  nobody dares to get near.

Stones and shells are scattered on the blocked road from a-Ram. Everybody knows who threw what on whom.  Flowers won't bloom here, it seems. 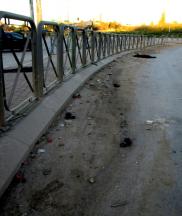