The Meitar checkpoint operated normally at this hour.

Driving on Highway 60 we saw children of settlers from the Southern Hebron Hills on a field trip in buses belonging to the Regional Council, along with guards.

On the road below Othniel a female settler is changing a tire, helped by a Palestinian who’d stopped to assist her.

When we got to Hebron we saw at the Tarpat checkpoint many soldiers, Border Police and police officers.  We waited because we understood something was going to happen.  Soldiers were stationed on all the rooftops in the area and a polite, patient paratroop officer told us in response to our question that Palestinians plan to plant trees and they’re getting ready.  We thought he was joking.  Everything had been approved and arranged. 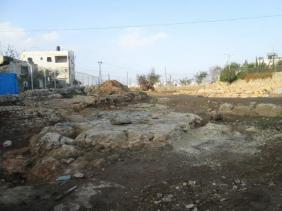 And, in fact, they were prepared for anything and we heard the commanders emphasizing to the soldiers the need to allow the activity to proceed peacefully and without any interference, although they’d prepared all the necessary equipment.  The tree planting would take place on land next to the Cordova girls’ school which stands on the rise opposite Beit Hadassah, and on Tel Rumeida, where anything could happen.  Foreign journalists arrived and we walked with them to where the young people were gathered next to the grocery at the entrance to Tel Rumeida. 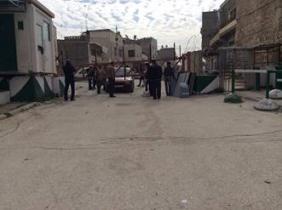 Some one hundred pupils and activities marched in a quiet and orderly manner, wearing shirts bearing the words “They uproot trees; we replant them” in English and Arabic, and carried olive seedlings.  No one stopped them as they climbed the stairs opposite Beit Hadassah to their destination and all planted the seedlings as local leaders made speeches.  M., our acquaintance, tells me “You know, these olives have a different taste.”  He reported on the president’s visit the previous day and said they’d been under curfew from 8 AM to 10 PM, and Palestinian journalists weren’t permitted to cover the event.  The tree-planting had been planned a long time ago by Issa and his friends, unconnected to the president’s visit.

Everything was quiet until Ofer Ohana arrived and began photographing and cursing (us as well).  The atmosphere was on the brink of exploding.  Fortunately the army and the police surrounded him and demanded he leave.  “This is the first time they’ve protected us like that,” M. says.  We’re fed up; we want quiet and if he returns things will get out of hand.  They finished and went to Tel Rumeida to plant there.  We left because it was already late.  Teachers from the school spoke to the activists, saying there should be guards at night because settlers may come to uproot everything.

Let’s hope it all goes peacefully.

When we walked back down to Shuhadeh Street, Ofer was there and photographed us repeatedly, cursing:  “You’re the garbage runoff, a traitor, helping our enemies, soldiers get killed because of you.  You should be ashamed,” etc. etc.  A young settler joined him and added his own “pearls.”  When I asked a soldier who was present to tell them to stop he looked at me threateningly and asked, “Why should I tell him to stop?”

We ran into some of the ecumenical women from Sweden who were happy to talk with us and learn about the complexity involved in our being loyal citizens protesting against the occupation’s injustice.  The conversation seemed meaningful to them, coming as they do from countries whose populations take peace and quiet for granted.

They go every Sunday to the Tarqumiyya checkpoint.  We arranged to meet them there on a future Sunday.

On our way back we saw again the fresh vegetables for sale at the Dura al-Fawwar junction, direct from the fields, especially the huge, yellow heads of cauliflower.

The owner of the field explains that they’re left to grow a year and a quarter without being irrigated.

They really do have a stronger, better taste.  We recommend them to anyone who comes here.

Hebron: Police car at the entrance to the city under the Givat HaAvot neighborhood

Near Road 317, by the village of Diragat, people are working in a field.