A surreal experience – we were detained for over two hours at the new Falamya checkpoint by five soldiers doing their compulsory service who claimed we were in Area A, where we’re not allowed to be.

‘Azzun – no IDF vehicle at the entrance o ‘Azzun.

After stopping at our friend’s shop we talk with some locals about the Molotov cocktail thrown at an Israeli car on Thursday, and the terrible results.

Thirteen youths were arrested, 3-4 were released, two admitted throwing it.

They say everyone in ‘Azzun condemns the criminal act which doesn’t help anyone and isn’t useful.

They accuse the Israeli government of creating an unbearable situation where unemployed young men live under occupation, without hope, and on the other hand accuse the Palestinian Authority of paying the Palestinians with jail and a sum of money when they’re released.  Jail is a relatively desirable solution for many people, compared to what they have outside.  They also accuse parents who don’t keep an eye on their sons and don’t stop them from engaging in violent acts.

The youths were caught easily with the help of collaborators and cameras installed along the road.

A new gate has been installed in the tunnel under Highway 55.  It was closed on Thursday and Friday, as was the gate to the main road.  Imposition of collective punishment, as usual. 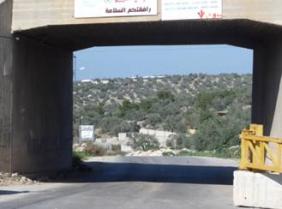 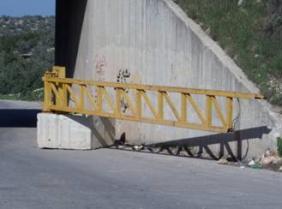 We drove to see the new gate on the road that passes under Highway 55.

The army has more plans.  Pallets of material wait by the roadside, intended for the checkpoint.  What are they planning to build here? 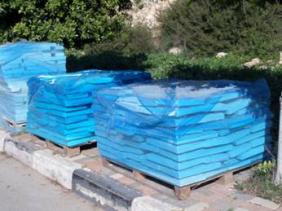 We continue to the Jayyus municipality to meet M., who speaks fluent Hebrew, and another woman who speaks English.

He complains about the hours the Falamya checkpoints– 914 and 935 (the new one) - are open.

The northern Jayyus gate is closed.  It opens only during the olive harvest.  Farmers whose lands are near that gate must now make a long detour and go through the new Falamya gate – 935.

He says the new gate opens three times a day, either before or after gate 914, at these times:

(Later we learned that the times he gave us were incorrect.)

The 05:30 opening hour in the morning is appropriate for daylight savings time, not for standard time.

be open for ten consecutive hours as was true of the old gate that was dismantled.  Again they explained to us how crucial it is for the agriculture that developed in recent years, that fruits and vegetables can get to market before noon. 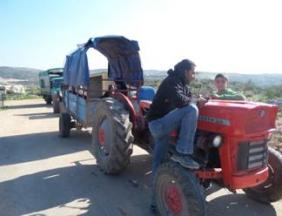 Farmers go through the Tzufim checkpoint (1037) without trucks. 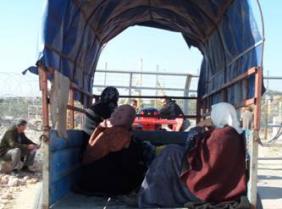 M. says there’s a new problem of renewing permits.  An hour before we met he received a phone call from the Palestinian DCL ordering them not to apply to the Israeli DCL because it has imposed a new demand – magnetic cards.  They’re unwilling even to consider it, not only because of the NIS 170 fee (a huge sum for many of them).  They refuse on principle.  A similar demand was made in 2003 when construction of the separation fence began, and they refused, and now the demand is being renewed.  Why should a farmer who goes to his field in the morning need any permit?

On January 1, 2014, many people received permits valid for two years.  Who received them?  True, the old people who no longer have strength to work.  Their children and grandchildren receive permits for one month, two months, if at all.

The army harasses them occasionally.  Ten days ago soldiers entered at 1 AM the home of woman we met, frightened the little children who burst out crying, conducted a rigorous search and left.  Of course, they provided no explanation.

M.’s son has been jailed for six months because he demonstrated against the fence.  Isn’t that his right?  The army treats them inhumanly.  All they ask is to be allowed to live like human beings.  To make an honest living, without checkpoints, fences and armed soldiers.

He’s acquainted with our colleagues who lead tours (Anat, Dalya, Daniella), who used to bring groups to them.  He asked that Knesset members be brought to meet them and see how they live.  No one ever came.  They’re  a f r a i d !

Palestinians wait for it to open.

Five soldiers and MPs on site from the Ta’uz battalion.

The Palestinian know the gate is supposed to open at 13:00.  The soldiers say the gate opens in the afternoon at 13:10, until 13:40, and began telling us the other hours it’s open.  We went to get a notebook to write it down.  One of them is talking on the phone.

And then – you’re detained.  You’re not allowed to be here.  Where did you come from?  How did you get here?

Why?  Because it’s Area A.  We:  It’s not Area A, and there was no red sign on the road notifying Israelis that they’re forbidden to enter.  IDs, please.  Shoshi presents a driver’s license, Karin discovers she forgot it at home.

Karin takes out a map and shows them we’re not in Area A.  They relent but continue to claim we’re not allowed to come here.  Why?  Because!!  There are also forbidden sections of Area B that Israelis aren’t allowed to enter.

If there aren’t any signs, how could we know?  We didn’t receive an answer.  They asked for the car keys.  We didn’t give them!!

A discussion that continued until 14:30 between two elderly women who tried to handle the situation humorously and five highly motivated young men, who believe in the system and are convinced they’re right.

They:  We have orders, and we’re obeying orders.  That’s our role.  We could also handcuff you, but we aren’t.  (What luck!)  What are we waiting for?  The police.  When will they arrive?  They’re on their way.  From where?  We don’t know.

Five soldiers stand there, don’t carry out other important missions, to open another checkpoint, they say, and guard two elderly women who are starting to lose patience.  What a disgraceful waste.  On that same day the IDF informed the localities surrounding Gaza that the army will no longer provide guards because of a shortage of manpower.

We telephone the humanitarian office – submit a complaint; telephone the DCL so they’ll explain to the soldiers there’s no reason to detain us – no answer; and to the office of Gaby Lasky, the attorney, and to Amnon.

At 14:30 the female MP informs us we’re to follow them in our vehicle along the security road (What an honor!!) to the Tzufim checkpoint – 1037.  And then what?  You’ll meet the police officers who aren’t allowed to drive on the security road.  Amnon calls as we’re driving, he spoke to headquarters and to the police.  The soldiers apparently understood we weren’t in Area A, and the police were told we “were being detained for our own safety.”  He wasn’t sure whether we’d be arrested.

At 14:45 the squad from the Ta’uz battalion transfers the “criminals” to the people at the checkpoint, along with Shoshi’s drivers license, and disappears.  The new squad politely asks for the car keys.  Karin hands them over.

We have to cooperate or this farce will never end.

At 15:15 a police car appears and a smiling policeman emerges.  He doesn’t ask many question, writes down our details, releases us and we follow him to the Eliyahu checkpoint.  We cross with a police escort, the Machsom Watch banner bravely flying from our car window.