When we arrived at 09:00 there were about 50 people at the gate.  All the lanes inside were open.  We saw new directional signs to the inner crossings – with a green circle and an Israeli flag.  We also noticed a new sign:  “Keep the area clean,” in Hebrew, Arabic and English.  The place was slightly cleaner than on previous visits but there was a strong odor of urine.

After a short time more people joined the line which now reached the benches.  It seems there are delays at the inner crossings.

We met an elderly man near the kiosk who was accompanying his 35-year old son to cancer treatments at Augusta Victoria hospital but wasn’t allowed through.  He wasn’t yet the right age and was told by the DCL he’s been blacklisted “for security reasons.”  He’s trying to find out what they are and wants to accompany his son to treatment, and has been waiting one month for an answer.  He spoke by phone to a representative of a human rights organization which is dealing with his problem.  He points to his crippled leg (from when he was a child) and asks why Israel is afraid of him and preventing him from assisting his ill son.

At 09:40 most of those waiting outside had entered but there was now congestion at the inner gates

.  A few minutes later more people arrived and the line stretched to the benches.

A young man in a wheelchair, accompanied by his cousin, waited for the humanitarian gate to open.  The soldier in the booth sat with his back to us and saw nothing.  We telephoned the DCL and reported there’s no DCL representative on site who can deal with the problem and that the soldier isn’t doing anything.  The DCL said there is someone on site and they’ll contact him.  Meanwhile the escort was able to get the soldier’s attention and pointed to the man in the wheelchair.  The soldier signaled them to wait.  A few minutes later an older woman arrived in a wheelchair, accompanied by a young couple and three children.  The soldier, who’d come outside, said the DCL representative isn’t answering.  We called the DCL again; they promised they’re looking for their representative at the checkpoint.

About 15 minutes later a policeman arrived and walked toward the humanitarian gate.  A few people who noticed he was about to open it hurried to stand next to it.  Eventually the policeman allowed only the two handicapped people and a very old couple to go through.

We called to the attention of a civilian security guard who accompanied the policeman at the humanitarian gate which had slammed shut that very elderly people are waiting there, including a woman with a walker, who are entitled to go through the humanitarian gate.  The guard said that anyone not in a wheelchair can wait at the regular gate.

At 09:50 someone from the security firm arrived.  We asked about the DCL representative; he said they don’t always show up and there’s no DCL representative on Friday.  He can’t open the humanitarian gate because he deals only with security.  At ten we called the DCL again but the soldier slammed down the phone.  Meanwhile a very long line had formed at the checkpoint.  There was also great congestion at the inner crossings.  After ten the line extended beyond the inner benches.  People occasionally were trapped in the revolving gates, include a very old woman with a cane.

One of the people waiting called out attention to the fact only two revolving gates were operating.  At our request the soldier opened the third one and the line began moving quickly. 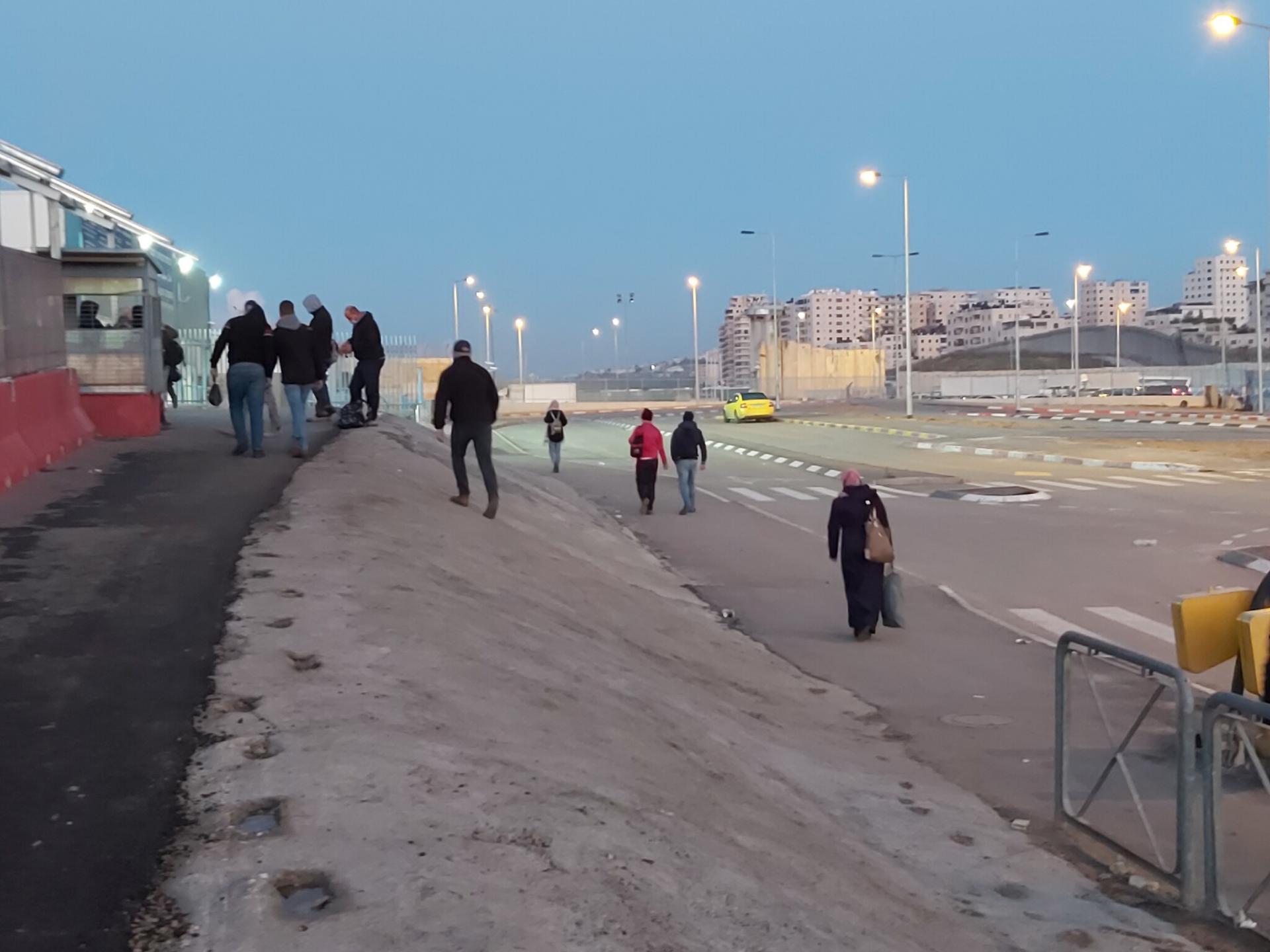 Climbing the slope as a shortcut 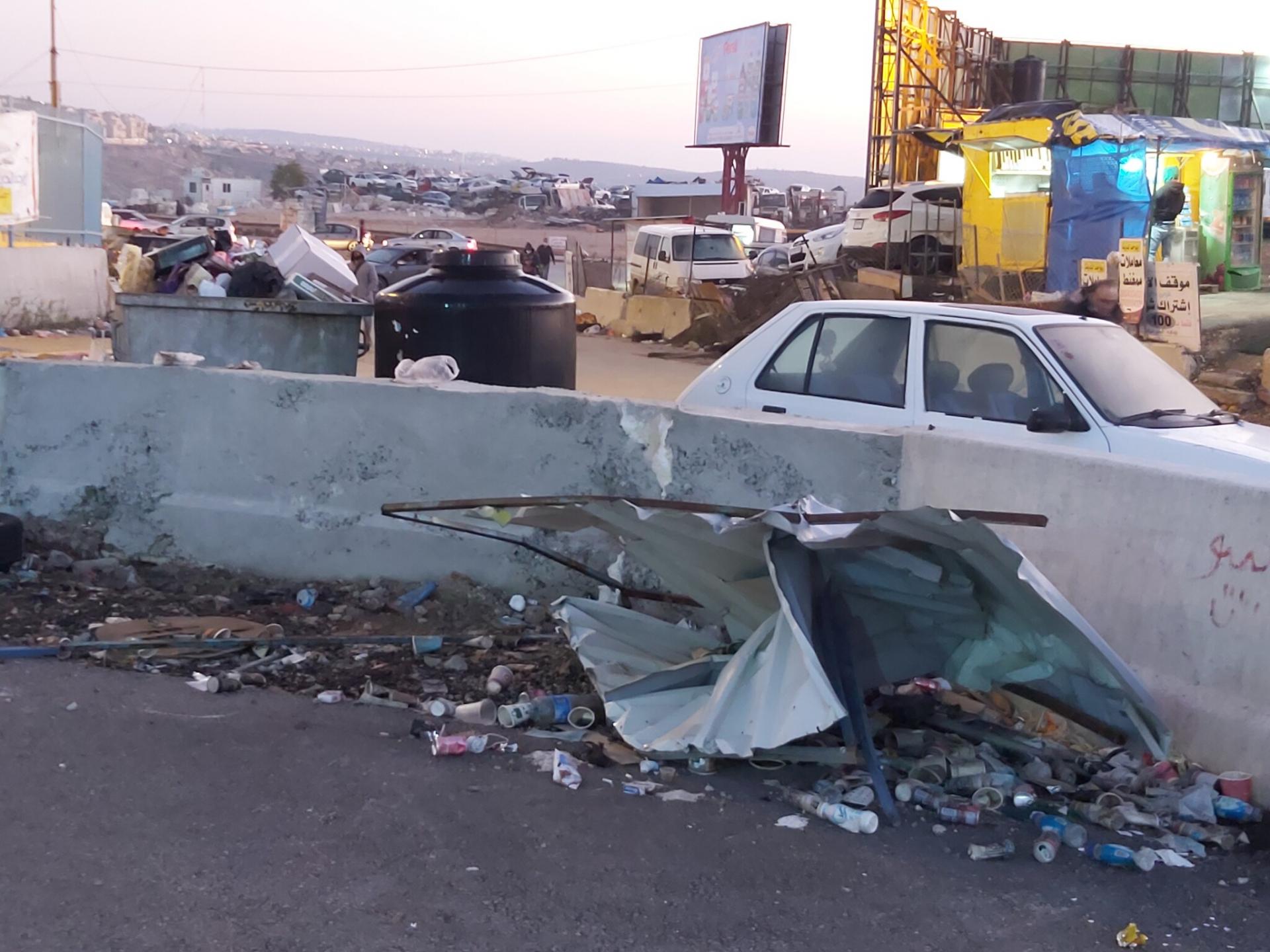 Overflowing trashcan by the kiosk 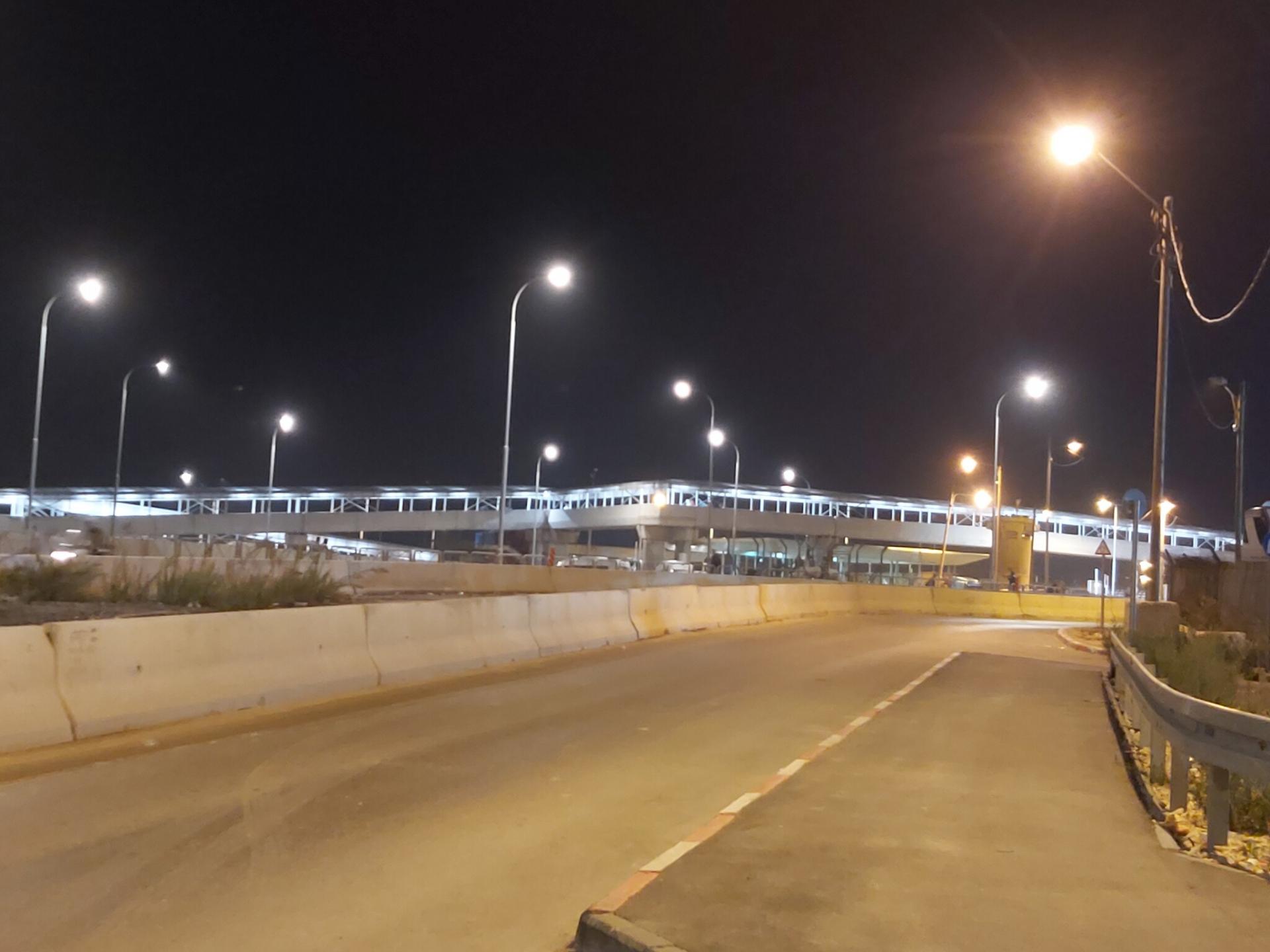