At 4:30, S. called me from the checkpoint and said, "Come!  There's a strike!"  I thought about who I could wake up to come with me.  In the end, I woke up the nearest person, my husband, and told himr we are going to the checkpoint.

We arrived around 5:30, in the dark.  Shortest day of the year.  Outside, in the direction of the workers' entrance, military vehicles and a group of soldiers.  At the exit, transport vehicles ready to go.  The exit area from the checkpoint was empty.  We tried to get to the entrance area and the group of soldiers stopped us at a certain point.  That is enough, as though protecting us. 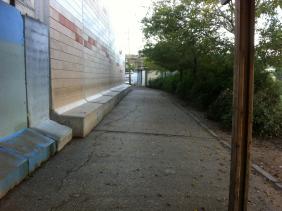 I am on the telephone with S., who is with the workers and he says that at the opening of the checkpoint at 4, some of the workers decided to call a strike, spontaneously, even if some rumors were in the air for a while already. It seems there was total agreement for the decision, and no opposition.  No one entered.  At about the same time, the checkpoint commander arrived, Ronen, as well as a DCO officer.  At a certain point, they held a discussion with the heads of the strike.  According to one of the Palestinians (R., who spoke to me), they were told that, within a month and a half, the new gate would be completed (which has been in the building stages for a long time, apparently awaiting the iron monger!?).  In any case, the meeting had no results and, after 7:00, the workers decided to go home.  A group of them is supposed to go to the DCO in Tulkarm, to explain the situation. 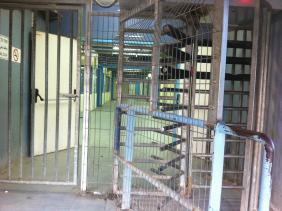 Meanwhile, dozens of transport drivers gathered together and discussion the situation with me.  They told me the shocking story of the day to day issues the workers had to endure.  I told them, as someone who is aware of administrative rules, that they are required to communicate with their employers and get them to organize and become a support group for the workers, against the impossible situation.  At 7:30, we left.