Aim of the shift: We met with the Village Group to discuss our plans for the preschools in the South Hebron Hills, and afterwards to visit and report on a nighttime arson attack on a house and its residents Deirat, a village near Yatta.

First, we drove to Sussiya (the Palestinian one, of course, which is located very close to the ‘legal’ settlement of Sussiya.  We met with Ehud, Arela, Eyal, and Hamed from the Village Group.  We also met with Nasser, a resident of Sussiya. 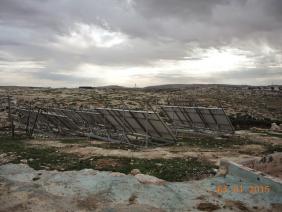 The members of the Village Group have had ongoing contact for a long time with villages in the area, including personal relationships with the villagers, actively helping, including finding funding organizations for the construction of solar panels (Sussiya, Um-el-Khir, and perhaps el

sewhere), gas production from animal manure, legal support in the fight against the destruction of village “buildings” (including tents), and in the support of establishing preschools and payment of salaries to the preschool

teachers.  We shared with them our impressions, thoughts, and dilemmas regarding our three-and-half years of activities with the Hashem-el-Daraj preschool, and our plans to make a workbook of the activities we have created for preschool children, in such a way that it can be easily used by preschool teachers. The Village Group expressed much appreciation of our activities and thought it might be wise not to try to spread our activities across too many preschools.  They suggested that given the number of preschools in the area we should try to recruit more women to our activities.  While we agreed, we also explained that it would make our work is more complicated in terms of organization, meetings (recently we have been very happy to have Nili join our activities but even with three people it is complicated to arrange meetings) ,storage of work materials, etc.  We decided to limit our activities to the Huda preschool, the Um-el-Khir preschool (in hope that the logistical problems preventing the preschool to function are solved), and the Zif preschool – if Amal, the preschool teacher, is interested.

Just as we were leaving, Nasser returned from an urgent trip to Shab-el-Botom, where there was a clash with settlers from Mitzpe Yair (an illegal outpost), who came down from the outpost in order to disrupt plowing.  Nasser has a camera

that he received from B’tzelem, and according to him, once the soldiers realized that there would be photographic documentation of their response to the clash, they behaved more professionally.  In this case, the settlers retreated from the plowing area.  According to Nasser, there is a preschool, for children 4-6 years, located next to the local school (only 6 classes, 55 children) that serves the children of Sussiya and Awad-el-Karum.  At the moment, it is winter break so a visit to the preschool will have to wait.

Arson of a house in Deirat:

Deirat is located near Yatta, on road 356.  Mahmud lives in a beautiful house near the road.  The living room is facing the road and next to the living room is the kitchen.  The interior of the second floor of the house is still under construction.  Mahmud has 5 young children, which luckily for him and for them, they sleep in a bedroom at the back of the house.  During the night between Tuesday and Wednesday, at about 3:00 in the morning, Mahmud was awakened by a noise at the front of the house.  As he approached the living room, he saw someone break the glass of one of the living room windows and attempt to throw a Molotov cocktail inside.  Because of the bars on the windows, the arsonist was not successful so he then poured gasoline into the living room, and threw a light match in with it.  Mahmud locked the front door and went up to the second floor from where he saw the arsonist enter a waiting car and drive in the direction of Carmel.   He watched the car until it disappeared around the curve leading to the Maon farm.  When he came downstairs, the rest of the family was awake and the living room was ablaze.  He immediately took his family outside, and with the help of a neighbor succeeded in putting out the fire.

The front half of the living room was totally burned, including furniture and electronic devices.  There was soot everywhere, even in the kitchen.  To complete the arson attack, the words “Revenge from the Kingdom Israel” were painted (most likely spray paint) across the front of the house. There is no doubt about the source of the attack: a Price Tag action (about something – what exactly?).  One can assume that is was carried out by representatives from the settlement movement. Whoever did it intended to burn an entire family – he/she could not have known that the family did not sleep in the living room.  Shocking – and it was done in our name, the chosen people.  We felt very ashamed, shocked, and deep regret that it is beyond our ability to do anything practical to help.  We also feel that it is important that every time a criminal act such as this is carried out by our ‘representatives’ from the settlements, that we women come to express solidarity with the residents and to condemn these activities.  It is perhaps the least we can do.