A few minutes after we had arrived, we heard an ambulance driving up to the line near the turnstiles. It appeared that a man had passed away. 7-8 check posts were working, but according to the laborers, the situation was back to normal (meaning bad) only two days after having improved somewhat in reaction to a TV report about the checkpoint.

4:30  When we arrived, we met some dozens of people who reported that the crossing had been easy and quick, that 7-8 check posts were open.  People who came later complained that the checking had stopped and that there 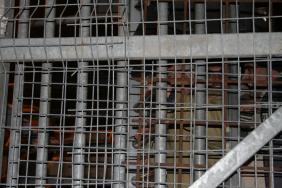 had been a 15 minute pause due to an emergency evacuation exercise of the security staff. We didn't manage to understand anything more. We would have liked to know what the plans, if any, were for the Palestinians in case of emergency…

Next to the fenced-off area, a few laborers were waiting.  They explained that they didn't want to join the line because of the great crowd. They preferred to wait until the pressure was over. 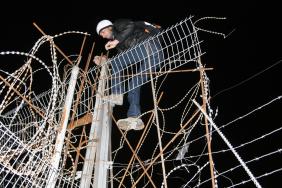 Like so many times in the past, at about 5:00, dozens of angry and frustrated people were gathered at the exit. They said that the checking was very slow, that the soldiers (female?) were not in a hurry but kept talking to each other instead of speeding it up in order to prevent a long line from being formed. According to them, it took 10-30 minutes to cross.  People said that only on Monday had there been a change for the better, but now it's clear that striking isn't enough, they have to demonstrate as well. They asked us from which media channel we were and as usual, some people said that, anyway, we couldn't help them, while somebody else thanked us and asked us to report about what we had seen.

One of the laborers at the exit assured us, over and over again, that they were all good people that had been checked and received their permits to enter Israel, and nevertheless, it was so hard to get through. It was as if he were trying to justify himself instead of blaming us, the ones who should be ashamed.

We left at 5:40. The fenced-off area was still very crowded with a lot of pressure and no enough air to breathe.