A calm morning at Qalandiya.

We arrived at approximately 05:15.  The parking lot is still blocked and empty; it will probably remain that way until Ramadan ends.  We drove a little farther; at the next plaza, behind the fruit and vegetable stand, there’s a pay-parking lot.  We parked there.  The attendants hadn’t yet arrived.  We walked to the checkpoint from the side, through the area prepared for Friday worshippers –concrete barriers had been erected to create a number of lanes.  Those permitted to enter will cross there.

As we approached the checkpoint we saw the lines start to extend into the empty parking lot.  The coffee stand is closed because of Ramadan, nor is anyone selling bagels and pastries.  People don’t smoke during the fast; almost everyone here usually smokes continually.  The area under the canopy is also relatively clean today.  Only three booths were open when we arrived.  But after two or three minutes the loudspeaker announced two more booths had opened; then they opened the revolving gate and admitted many people at once.  That shortened the lines, which now didn’t extend beyond the covered area.  M., the policeman, arrived at 05:20 and joined the soldier in the aquarium.

At 05:30 the lines were already very short, extending only slightly beyond the cages.  The few women who occasionally arrived joined the line from the side, at the entrance to the cages; the men allowed them to enter.  We timed some of the people on line; it took them about 15 minutes to cross, which is considered very good compared to what’s usual at Qalandiya at this hour…  Apparently there are fewer people because of Ramadan, or they arrive earlier because they wake earlier in order to eat before they begin their fast. 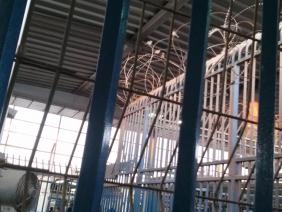 When the revolving gates

opened the cages also emptied; the only lines were near the revolving gates in front of the inspection booths.  The revolving gates at the exit from the cages remained open; whoever arrived went through immediately.  At one point only a cat was in the cages, and even it chose to crawl under the fence to reach the garbage can next to the aquarium and look for something to eat.  One of the privileges of a cat for whom fences present no obstacle…  Birds perched chirping on the barbed wire above the cages.

A female soldier arrived at 06:00 to relieve the soldier in the aquarium, accompanied by M., the policeman (who comes and goes).  People now waited in the cages, the female soldier spoke on her cell phone, getting organized.  The people in the cages began calling to her to open the revolving gates because the lines at the inspection booths had become very short.  After a moment she opened them and admitted everyone; again the revolving gates remained open.

The DCL non-com who’d arrived slightly after 6 to open the revolving gate had nothing to do.  A female officer arrived with him, and M. returned a little later with another female soldier and sandwiches for the soldiers.  They all entered the aquarium; they didn’t eat or drink outside.  We saw no security guards this morning.

We left about 06:10.  The cages were empty.  Some people waited on the benches.  Apparently they came early, worried there would be lines, and now decided to rest a little before starting their work day.  Before leaving we saw a sign handwritten on poster board, hanging on the fence.  As best we understood, it was an appeal to the free Palestinian people, the nation of the intifada and the martyrs, you who celebrate while Gaza bleeds!  What have you done for your brothers?  Followed by a quotation, apparently from the Koran.

When we returned to the parking lot we encountered the attendant.  This time it was a youth who spoke neither Hebrew nor English; it was hard to communicate.  We asked how he was; he said in A-Ram everything’s ok.  We parted hoping for quiet in the south as well.

We returned via A-Ram and Hizma today also, and entered Jerusalem via Pisgat Ze’ev.  The road is pretty empty, past the checkpoint as well, through which people who look Jewish, like us, cross without inspection.  Since traffic was light we decided to drive via Beit Hanina, which becomes the Shu’afat Road.  It’s now quiet, and even pretty clean.  Initially we saw signs of the disturbances only on the charred large garbage bins.  Farther along we also saw the demolished bus and light-train stations.  The train is running again; staffers at stations sell tickets because many of the ticket machines were destroyed.  We also saw cameras erected at a number of intersections, 2-3 people in fluorescent vests (municipal workers?) standing alongside  to protect them.  A police vehicle was near the French Hill junction but we didn’t see policemen, nor did they appear to be needed.  Traffic flowed with no problems; there were hardly any people in the street, probably because it was early, and because of Ramadan.  We soon reached the city center.