applies to all permit holders from Hebron.  The parking lot is empty.  The merchandise crossing is also deserted (no trucks are unloading sand, and none are loading).

Eshtamoa outpost – Permanent structures have been added and more soldiers are on guard.

Deir Razek – Soldiers come mostly at night, enter homes and turn everything upside down, the children are very frightened.  They’ve entered about 50 homes.  We spoke to a Palestinian family; they’re all tired, think Bibi is forcing them to begin another intifada.  The young man tells me they don’t even have strength for the World Cup and are worried about what will happen during Ramadan (which begins in five days).

We went to Dura to pay our respects to the Dudin family, which is in mourning.  We arranged that M., from B’Tselem, would join us.  Dura looks like a very attractive town, with a lovely main street and shops, everyone’s in the streets, there’s no closure, nor were there soldiers when we were there.  M. tells us that the army entered about 100 homes in Dura.

The night they came (about 1000) no one slept, no one knew when it would be their turn.  The soldiers came around midnight and left at dawn.

Mahmoud, who’s 13, was afraid the soldiers would come to his house, and was still upset after his mother closed the gate to the house and fled through the window to join a group of youths throwing stones.  They were all about three years older than he; he just stood there.  The soldiers didn’t use non-lethal means to disperse them but fired live ammunition from 80 meters away, and hit him in the chest.  He died immediately.

His uncle told us the funeral was the largest he’d seen during his entire life, and he’s 51 years old.  Today an art fair opened in Dura, named for Mahmoud.  His mother, whose grief was terrible, sat with us for about an hour, a broken woman.  She has twin daughters, aged 7, and is surrounded by family members.  We gave her information about the Palestinian forum of bereaved families.  We hope they’ll be a support group.  Everyone we spoke to condemned the abduction, or didn’t believe it occurred, feel Israel is backing them into a corner, doesn’t want peace, why is the blood of their child worth less than that of a Jew?

The bereaved parents at the Dura-al Fawwar junction.

Traffic flows freely.  A group of Palestinian youths stand on a hill across the way singing protest songs and throwing rocks.  The army fires smoke grenades at them and a fire starts.

The youths aren’t there on our way back, but the army still is.

Beit Haggai – The balloon is in the air.  The entrance to Hebron is open; there are no soldiers.

Kvasim junction – Entry to Hebron is unobstructed, soldiers in the pillbox.

Har Manoah – The military base of the Yehuda region brigade, a bulldozer loaded on a truck, a press tent that appears deserted.

Shuyukh – Hebron – The entrance to Hebron is blocked by the gate and soldiers together with Border Police are there 24 hours a day, seven days a week.  The girls school is deserted because of summer vacation.  M. told us that soldiers also entered all the schools while exams were underway, and searched wells, cisterns and any place under ground.  On the other side, under the canopy, Palestinian taxi drivers were sitting, in a very foul mood.  Their obvious despair is heartbreaking.  They said soldiers didn’t enter many homes in Shuyukh.  The soldiers didn’t allow us to go to his home – so we spoke next to the concrete barriers.  The Palestinian taxi drivers on the other side of the plaza didn’t want us to photograph them.

Hazayit crossing- Soldiers there don’t interfere with the free flow of traffic.

Highway 35 – Many soldiers above Beit Kahil and in the tunnel from Hebron to Beit Kahil.  An extensive search is underway.  We run into all the military correspondents.  It  has been declared a closed military area.

All the wells and cisterns are being emptied; the Palestinian farmers may face a severe water shortage.

Idna and Tarqumiyya -  The owner of the grocery store tells us that army units had just come through Tarqumiyya to Beit Kahil; Tarqumiyya is open, there’s no curfew.  But Idna has been under curfew since the abduction.  It was lifted once for two hours; people move about only on foot.

Here’s a view of the Idna checkpoint:

People there are also in despair.  They say laborers aren’t allowed through the Tarqumiyya crossing, they have no money, no work and are very desparate.

On our way home we visited the Ja’abari family near the entrance to Kiryat Arba, talked to them, had tea, ate mulberries from their orchard, sharing fantasies of better days. 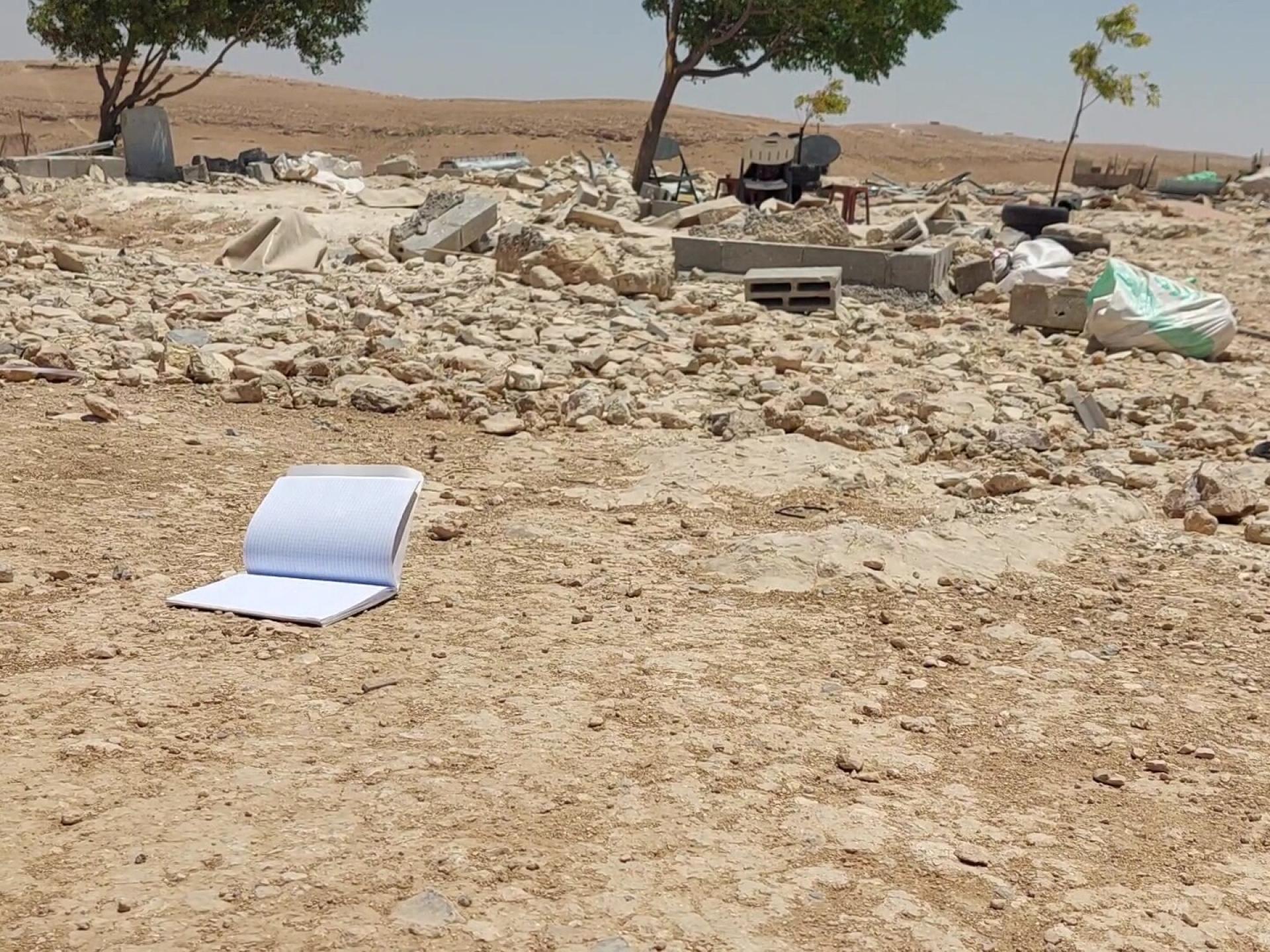