We arrived a little after 05:00. There are two lanes open at the car checkpoint, and the lines are short. In the pedestrian passage there is almost no line. Only three stations are open, and in a short while there is a waiting line. The tempo of passing the checkpoint was reasonable, but at this hour many people come and three stations are not enough. Towards 05:30 the lines start emerging into  and beyond the parking lot. Around 05:40 they openned the two extra stations, and had moved many of the people waiting through three cages and turnstiles. We followed a young man wearing a distictive yellow shirt, and it took him 13 minutes until he disappeared from our sight. 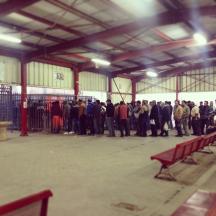 In the meanwhile we drank a glass of hot tea and talked with H., whom we had seen in the past. He works in the market, at the bakery, and tells us that there is an old oven there, where they bake an Iraqui pita, and more. He tells us that groups of tourists come to them to see the oven. He invites us to come visit. He reports that yesterday too the passage was reasonable. According to him it depends on the soldiers at the stations.

A little after six there were lines from time to time, but they did not accumulate much beyond the fenced corridors, and did not get from the shed into the parking lot. Most of the people who usually wait at the Humanitarian gate went to the ordinary one. When the NCO from the  DCO arrived, he and the policeman let people pass through the Humanitarian gate too, but there was no pressure on the gate at any stage.

06:25 - there is a line only in thecages. We left the place. We decided to try our luck this time going through Hizme checkpoint towards Pisgat Zeev, instead of waiting in the vehicle line in the crowded Qalandiya checkpoint. On the way there we saw sodliers standing on the side of the road, near the concrete observation tower. But they only looked at the passing cars and did not stop anyone.The way to Hizme checkpoint is of  course longer,  but there are no traffic jams and the passage is quick, without a need to show IDs. The problem is that even at this early hour the road after the checkpoint in Pisgat Zeev is jammed, so that either because of the distance, or because of the time it takes, it is better to wait at the crowded Qalandiya checkpoint.