began at 18:00; residents of the West Bank are forbidden entry to Israel, except for residents of Jerusalem and holders of special permits.

Workers in the Atarot industrial zone are among those allowed entry.  But make no mistake: it’s not because of concern for their livelihood and welfare that they receive permits.  The ustated reason for this “benefit” is the desire not to harm the profits of their Israeli employers, the factory owners. 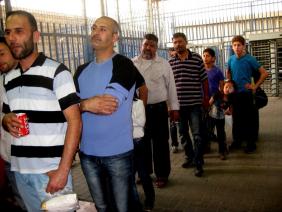 People crossed through the checkpoint slowly, starting at six.  They all know the rules:  how to extend the hand holding the document, how to remove shoes and belt, and place metal objects and bags in the plastic trays.  The soldiers glance sleepily at the document, compare the photo to the face of the person standing before them and weakly wave them toward the exit of the inspection area.  One laborer on his way to work violates this dreary routine.  He was a sole exception to the file of those with blue/privileged ID cards – the green ID he presented, along with a crossing permit, delayed the process and confused the soldier who spent a long time inspecting what was printed on the document and consulting his superiors as to its legitimacy.

While he waited the man told us he’s employed at a poultry slaughterhouse in Atarot, that his work day is, essentially, a night – from evening until dawn, 12 hours a day, five days a week, earning NIS 4000 a month.  No, he doesn’t receive benefits.  But the alternative – unemployment - is worse.

Two of his children are students; he’s mortgaged his present on behalf of their future.  And when he finally exited the inspection area he lifted the hand holding the permit, saying “This is worth everything.”

Against the backdrop of the closure imposed for the day commemorating those who died in Israel’s wars and Independence Day which follows; the sight of men, women and children waiting patiently at the checkpoint; the neglect and poverty which are a daily reality throughout Palestine; the occupation’s laws that discriminate between people on the basis of their religion and their ethnicity - I hear the Prime Minister’s words echoing in my mind, his greeting to the participants in the Bible Quiz, and particularly to the winner who, like others, came from abroad:  “The Land of Israel belongs to you – it belongs to Jews everywhere.”  Thus, in a single breath, as by his policies, he appropriates this country, from the Jordan to the sea, solely for Jews, dispossessing of their land and their human rights all who are not members of the covenant.