We decide to go to Qalqilya after hearing Nadim’s account of having been, on Saturday, in a big traffic jam spreading from Qalqilya all the way to Nabi Ilyas. A new, temporary Checkpoint stopped incoming cars and inspected them at the entrance to Qalqilya.

9.50 At the outskirts of Qalqilya, we stop near a taxi parked off the road, to get information from the driver. He tells us that a Checkpoint was set up early Saturday morning and removed around 3 pm. But because of the traffic jam, people were stuck in the road till dusk. According to him, no one was arrested. However as Ana later read, The Jerusalem Post reported today that in Qalqilya an underground Hamas cell was discovered on Saturday including nine Palestinians and 1 Israeli Arab; sixteen people were arrested.

We arrive via Qalqilya’s main road to the (Kibbutz) Eyal passage. At this hour only a few people are waiting for the Checkpoint to open. Most will either request a permit to enter Israel, or ask to have it returned or else to extend its date. Around 11.00, when the Checkpoint is officially due to open, another 50 or 60 people arrive.

During this waiting period, we meet several people who have been forced to  return again and again without solving their problems. The MachsomWatch badge inspires trust.

Y., a Jordanian citizen---an impressive-looking young man who speaks Hebrew fluently and correctly---injured his leg in a work accident in Israel. After receiving First-Aid in Kaplan Hospital, he was taken straight to Qalqilya, where he lives. Since there is no Hospital here, he was operated in a local Clinic, but it was unsuccessful, and he was left limping badly. He wants to return to Kaplan Hospital---which discharged him without providing an adequate treatment---he hopes to receive now the appropriate medical treatment he really needs. Since he has a police-prevention order, he doesn’t get a permit to enter Israel. And so he hobbles back and forth on foot from his home to the Checkpoint.  Arriving at an early hour, he keeps hoping to have his request granted, only to return home very upset. We write down his details, so that hopefully we’ll be able to help him.

11.20: only now is the gate opened---20 minutes late. From now on, the soldier’s shouts echo from afar and accompany those entering. Soon, the movement in the opposite direction begins: people whose request was either granted or refused go out through the turnstyle.

M., an elderly man, an invalid, moves slowly on his crutches towards the exit. He was also injured in Israel. He fell from the height of a third floor, while working on a construction site in Ramat Hasharon, all his body was injured, and till now he has undergone seven operations. He believes in physiotherapy, which he is supposed to receive in Beilinson Hospital twice a week. Understanding him, and aware of the difficulties in his entering Israel, the Dr. there gave him an appointment slip without stating the exact hour. However, the soldier at the window doesn’t like the Dr.’s gesture. Without a specific hour stated in writing, she is unwilling to handle his request. To punish him, she makes him wait. When she finally turns to him, she demands: “leave your crutches!” while he, about to fall, places the Dr.’s appointment slip on the window for a whole hour. But she doesn’t give him the desired permit. With tears of humiliation, he asks for one thing only: ”that they should attend invalids appropriately.”

We have his details and hope to be able to help him too.

Ana meets at the Checkpoint an unusual person: a Palestinian-American tourist who has come back to her native town after 40 years. Here is her story:

This woman, Mrs. X, was born in Qalqilya, and after the 1967 War, emigrated with her family to the USA. Today she is married and the mother of three. She works as a nurse in a Jewish Hospital in North Carolina, and also teaches Arabic. According to her, there are friendly relations between Jews and Arabs there, and they all get along well.

After 40 years, she has returned to Israel to sell some land which belonged to her late Father. Now, while waiting at the Checkpoint since 9:00 (though it is supposed to open only at 11:00), she is surprised and angry at the inhabitants’ way of life. Why must one wait such long hours for the gate to open? And what about the young people she sees around her? Why don’t they have jobs? She herself needs a permit to legalize the Will which she brought along, so she can sell her piece of land, and she cannot understand why she and all those around her have to wait so long. She seems not to understand the situation around her. (Just like the legendary Rip Van Winkle, who woke up after a twenty-years’ sleep into an unfamiliar world).

Mrs. X slips into a stream of childhood memories. In 1967 she and her family were forced to abandon Qalqilya. Men, women and children were expelled to Shechem. Israeli soldiers suddenly began to shoot at them. She saw how a young woman was shot and killed while breast-feeding her baby

. After some years, Mrs. X met this baby, who survived, and today lives in the US together with her children.

Mrs. X talks about Education in the Palestinian community in the US: there are very few Arabic Day schools, mainly in Chicago, Washington DC, and Michigan. Girls and boys study separately. In other towns, the Arabic community is smaller and therefore the children go to American schools and study Arabic and the Qu’ran in the weekend. She herself teaches Arabic in such classes.

The Jewish Hospital, where she works as a nurse, was founded by a Jew who emigrated from Germany to the US in 1940, and after several years donated a large sum of money to build the Hospital. Today the Hospital spreads out over an area equal to that of Qalqilya, but unlike it, it offers a peaceful co-existence to both Jews and Arabs.

12:30 Departure from Qalqilya. At a Checkpoint set up by the Palestinian Authority, Palestinian cars are stopped for inspection.

At the Qalqilya Border Police base, the watchtower is unmanned, and no policemen are visible in the area. 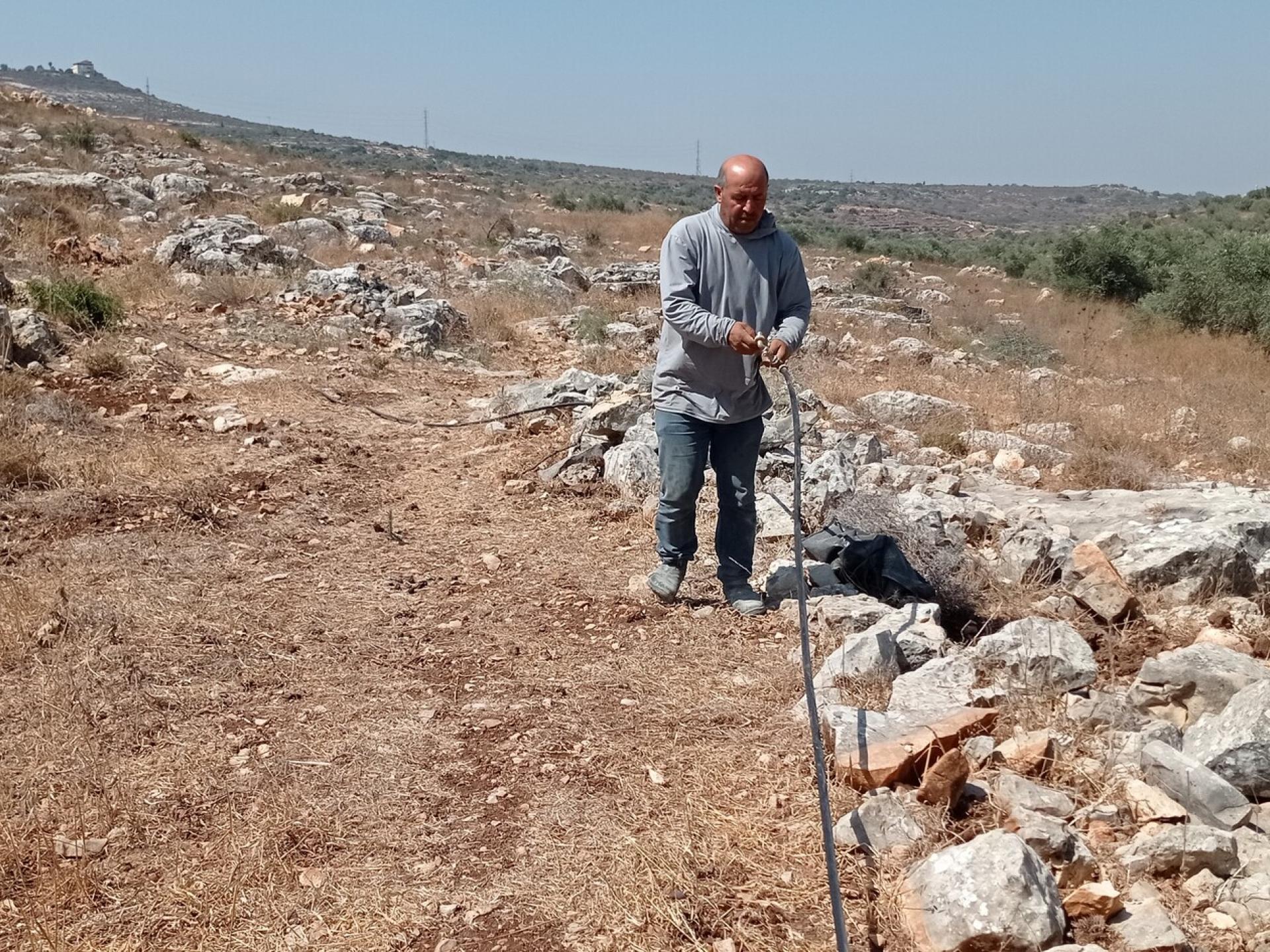