Place:
Qalandiya
Tags:
Crowding
Humanitarian Queue
Soldiers at checkpoints
Observers:
Nili Fisher, Orit Dekel, Michal Winer, Ofra Tene (reporter and photographer), Iva A. (translator)
May-2-2014
|
Morning
"My grandmother does not do terrorist attacks"
This is what the soldier woman, posted in the bunker in Qalandiya, told us when we asked her to do an exception to the rule of Friday, and open the  humanitarian gate for two women, one of them an old woman with cast on her leg, and the other old and frail and could hardly stand on her feet. "imagin she was your grandmother" we told her, and this was her answer.
We had arrived by 09:00. The filthy area was full from wall to wall. There was only one grumpy woman soldier in the bunker, no DCO representative, no humanitarian line, but at least all the searching units active. The turnstiles move at a regular rate and those going for prayers, many of them old men and women, stand low in the cages. Every once in a while there is a call on the loudspeaker - the woman soldier announces which lane is openned. "thanks to the soldiers who woke up at three in the morning and did not have breakfast you are standing here" she lashes at us (no, we are here thanks to the occupation,  we tell her. And really, why should the soldiers not get breakfast, and should the young patriotic energetic miss have to cope all alone with the unbearable situation in Qalandiya checkoint on Friday?) We are her enemy.
The people who stand in line tell us that it will be an hour until they go through the whole track. We already know that the IDF measures the time from the passage of the turnstiles, until they went through the documents' checkup,  and they - the experts - are happy with the results they got from the shortenned trails they decided to measure. We call the DCO asking them to send a representative to open the humanitarian gate. 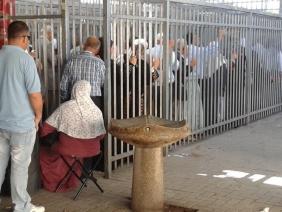 "I will check it at the checkpoint" the woman soldiers who spoke with us sais. After a while, we call again. "A DCO representative had been there between eight and nine" says the soldier who refuses to tell us her name, and she is apparently lying, since the representative of the foreign observers who has been here since eight o'clock tells us that there was nobody, and the rude treatment of the bunker lady was obvious already then. "so people need a representative now, when they go to pray, and not at eight"' we claim. 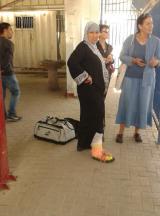 "Friday there is no DCO representative" she teaches us, and we, having been here longer than any patriotic soldier, and have seen that sometimes there is a representative, sometimes not, sometimes even more than one, and sometimes they are even polite and helpful, which means - doing their job for the civil population. "And I am not going to have this conversation with you" she ends the talk.
The crowded line makes the old woman try and push through the line, and there is a fight and shouts. Difficult scenes.
There is an old lady, accompanied by her daughter and endless number of plastic bags, and an old lady with cast on her leg. They make us contact the angry soldier in the bunker, and the DCO representative at the other side of the phone . Orit demands the DCO representative to send a representative. The soldier makes her amusing grandmother's remark and tells the old lady to talk to us "they will help you". But to our delight she also makes the gates

open. "only those two women. tell them". At the end she agrees to let the daughter who accompanies her mother with all the bags to go with her mother.
10:30 - the waiting line shrank, and we went away.