After years of standing at the Qalandiya checkpoint in the morning, I took a break for a few years. 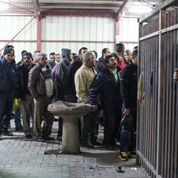 I could no longer bear the difficult situation there, which never changed.

I can choose to remain in bed in the morning. The Palestinians don’t have that choice – they must go to work. The Qalandiya checkpoint is an integral part of their lives.

And I’m now back at the checkpoint, and once again feel the same impotence, frustration and anger.

The stupidity and folly of checkpoint management, the obtuseness, indifference, cumbersomeness – they’re impossible to comprehend. 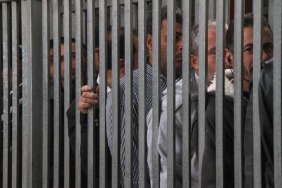 Since the checkpoint became a “crossing” – that is, a terminal, its operation has been turned over to the police (like the Ben Gurion airport).

The police are at the top of the pyramid, and their representative at the checkpoint is the police officer. He’s in charge of the female soldier who opens and closes the revolving gates

at the entry to the fenced corridors. He says, when we ask, that he’s responsible “for order and security.”

Under him, but not under his authority, is the DCO representative (the Civil Administration – a euphemism for military rule…)

He’s in charge of opening the “humanitarian gate.” 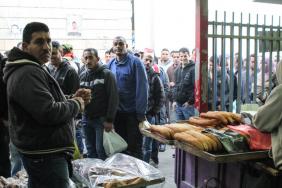 There’s a third important functionary at the checkpoint – the military police – responsible for inspections taking place within the fenced corridors.

Neither the police nor the DCO control the fenced corridors and the inspections carried out there.

If all the fenced corridors haven’t been staffed in the morning by the military police, and if the male MP flirts with his female colleague, who’s flirting with her iPhone – neither the police officer nor the DCO representative can do anything about it.

If inspections in the fence corridor take a long time (“a new unit’s on duty,” they told us) neither the police officer nor the DCO representative may intervene.

And if the DCO representative goes to the bathroom and a long line of women, children and men forms at the humanitarian gate, the police officer isn’t allowed to open it.

And, of course, also on site, at the bottom of the pyramid, is the private company’s security guard to protect all those functionaries.

And when they all gather for a friendly conversation in the closed, windowed room, they can neither hear nor see what’s going on in all the fenced corridors. Corridor 5 is almost empty. “Open up, open up, corridor 5 is empty,” I call hoarsely.

“It’s better today” say the Palestinians, and I can’t bear it.