We got to the parking lot, which was not full, but we could hear shouts from far away, and inside all Hell broke loose, pushing and shouting.  Although 4 inspection stations were operating, the pressure and chaos were great.  People were complaining that they didn't open the turnstiles frequently enough and, when they did open them, only a few people were let in at a time.  When the turnstiles opened, there was immediately pushing and shouting and everyone standing there was crushed trying to get into the "sleeves" of the barriers and moving forward a bit toward the hoped-for passageway. Many people, especially older men, but not only them, were sitting on benches and waiting for the pressure to go down, when it would become possible to stand in an organized line.  In the present situation, it was really a life and death process.  When the turnstiles closed for a while, people began to shout and whistle in an attempt to get the soldiers to open them again. 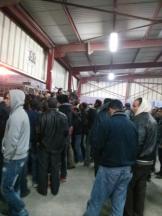 Hannah called the DCO and reported what is going on.  Because of the noise, she couldn't even hear what they answered.  Some of the people told us that it had been this awful all week.  Yesterday, they brought soldiers who were supposed to be learning their jobs.  Possible the soldiers doing the work aren't not trained sufficiently.  But claims are also being made that the soldiers are too busy with their smartphones to carry out the inspections.

Everyone remembers last Wednesday, which demonstrated that things could be done better.  People said that they live near their workplaces in Atarot, but the trip which should take a few minutes now takes hours.  One man told us that he lives near Ramot and needs to get to the shuk.  Sometimes he travels to the checkpoint at Zeitim to get through more quickly, but this way costs a lot.

No improvement.  A long line is formed near the Humanitarian Gate as well, though it is closed.  Hannah calls the DCO again, but is told that there is nothing to do until the representative of the DCO gets there at 6.  At a certain point, the people in line began to come to blows.  This was stopped by the intervention of friends who kept them apart, and also by the fact that, after many minutes, the turnstiles opened again and the line started to move forward..

At 6 the Security Forces began to work.  The police arrive and talk on the radio, and more soldiers and guards come out of their bunker, or from the direction of the DCO, but the representative of the DCO who is supposed to open the Humanitarian Gate has still not come.  Inspection station #5 opens, but this doesn't have any effect on decreasing the pressure in the line.  The guard says that some soldiers will come right away to open the Humanitarian Gate, and that does happen, at about 6:10.  It takes a little while for the line at the Humanitarian Gate to dissolve.  Meanwhile, every time that people enter from there (some of the men are sent to the regular line), there is a long line at station #5, which is meant for them, but some of them go to the regular line which causes protests in that line.

Now there is no line next to the Humanitarian Gate, but more people keep arriving, among them a lot of youths and young girls on the way to school.  The officer opens the gate every time that a few people pile up.  There is no shoving in the regular lines by now, but there are still a lot of people.  Those sitting on the benches get up and join the line.  Now there are 3 orderly lines, stretching from the 3 "cages", and one of them reaches beyond the shed toward the parking lot. But now they are waiting in order and quiet and the policewoman who stands outside the security bunker checks on the situation all the time, and orders the soldiers when they should open the turnstiles ("to stream" in the language of the security forces).

Still long lines.  From outside one can hear the horns of the trucks and cars, which means the situation is bad there as well.  The officer approaches to bring people for the last time through the Humanitarian Gate, after the regular lines have finally shortened.  At the end, he does it again at 7:20.  After that, everyone went through the regular line.

The place is finally empty, we left.

At the vehicles gate they checked our IDs and we went through with no problem.  Photos are attached.