There was not very much to report from the checkpoint today – very few people were there in the afternoon. 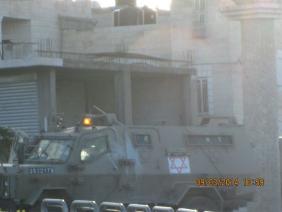 Two or three passageways were operating during our entire shift so that lines were very short.  On deciding to leave the CP, we stopped to talk with our friend, the sweets vendor.  We asked him how much money he earned for his day’s work when there were so very few people at the CP.  He shrugged his shoulders with a self-effacing smile and said that he could earn about NIS 50 (which is less than $15).  How does he survive?

On our way back to Jerusalem, we passed by the northern entrance to the city of A-Ram.  Two IDF vehicles were blocking the entrance to the city and there were soldiers on the ground.  From time to time someone shot tear gas canisters at unseen targets in adjacent alleyways.  The cab drivers who were parked not far away told us that youngsters had been throwing stones since noon, apparently in reaction to the killing of the Jordanian/Palestinian judge earlier this morning.  In Lil/Jabba CP we saw a policeman checking the papers of several drivers driving towards Ramallah from Adam.