Observers:
Natanya G., Pamela B. and Phyllis W. (reporting)
04/02/2013
|
Afternoon
3:30 PM:  Once again the huge gate in the Wall was open and most of the vehicles ahead of us turned in to A-Ram.  We continued to the parking lot.  There were very few people in the CP and lines were short.  A female soldier was checking the papers of Palestinians in Passageway 4.  In a burst of good will she started a kind of friendly free-for-all with the male soldier sitting next to her, all in full view of the 8 amazed Palestinians waiting patiently by the turnstile.  We phoned the hotline and asked them to intervene.  Someone must have spoken with the 2 soldiers on duty because she, at least, looked pretty sour thereafter.
We wandered around the CP for a half an hour or so without finding anything else to report, so we decided to take a look at (and show Pamela) another CP – Atara. 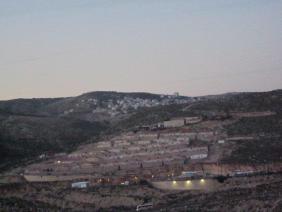 The CP itself was abandoned, but the pillbox nearby was manned by several soldiers.  The views along the way were amazing – the green fields in the crystal air, the hills of the Bashan Range as well as the towers of the Tel Aviv skyline against the sea.  But the most amazing view that we saw appeared suddenly right ahead of us as we approached the turn-off to P'sagot and Kufr Yakub:  the whole hillside ahead had suddenly been covered by rows of "caravillas" (mobile homes) standing on multiple rows of beautifully built stone terraces.
We turned in to the new settlement and the (female) soldier guarding the gate told us that we were standing at the entrance to the new "Megaron" (which has been erected to replace the old illegal outpost which the government had promised to demolish).  The new settlement calls itself a "neighborhood" of the older settlement Kfar Ya'akov, further away up the hill.  On our way back to Jerusalem we searched for a vantage point from which to photograph the abomination and found one in the parking lot of the Rami Levi Supermarket in Sha'ar Benyamin.  Natanya's photos are attached.
Qalandiya