A visit to Khirbet Jubara

Khirbet Jab’ara is located south of Tulkarm and east of Tayibeh. The separation fence left this small locality on its west side, the Israeli side (there was free access to Israel), but cut it off from Tuilkarm, the district center. Much of Khirbet Jab’ara’s land was taken to erect the small settlement of Sal’it, numbering about 100 families. There was an appeal to the High Court, which authorized moving the fence 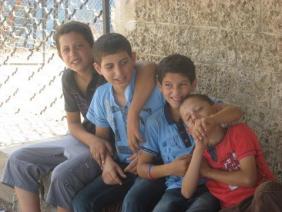 Karin met a woman from a humanitarian organization belonging to the European Union whose headquarters is in Paris and which has offices in Ramallah and in Qalqilya staffed by Palestinians. She told Karin that soldiers at the checkpoints harass young pupils on their way to school. So we decided to visit Jab’ara and hear from the residents what’s going on.

12:30 Te’enim gate. Even though we coordinated our visit with Tedesa, the soldiers at the checkpoint don’t know about it and we must wait more than 20 minutes for them to contact him and get his authorization to open the gate for us after inspecting our IDs. As we approached the isolated house Abu Hassan’s wife emerged to greet us and gave Alex a big hug. She told us her husband had died; her youngest daughter lives with her. She came out through a small gate she opened with a key she had.

Smiling village children who’ve already returned from school are at the entrance to the grocery. We talk with the owner and other Palestinians who stop by, asking their opinion of the new route of the fence. “Good and bad…” they reply. Some are satisfied, others aren’t. We meet two blacklisted people whose Israeli work permits were cancelled and give them Sylvia’s phone number (we’ll email their details to Sylvia). We attempt to meet the village leadership; Farouk is in Jericho and Awani is in Nablus. Both report there are no special problems.

13:30 We stop the school bus driver after the children have gotten off. He says that a soldier usually enters the bus, inspects and authorizes him to continue. He’s been working for the company five years and has never been required to include the number of the bus on his permit, a new requirement which is very burdensome for him because he often switches buses (because of a breakdown or some other reason).

We try to leave through the eastern checkpoint – the children’s gate – but we’re firmly refused. The gate is only for residents of the village and people with a permit.

14:00 We return to the gate through which we entered – the Te’anim checkpoint. There’s a new shift of soldiers. They don’t permit us to leave the village. More inquiries, more calls to the DCO while we wait in the car. Karin calls Tedesa but the MP isn’t allowed to speak to him, only to his own commander.

About a quarter of an hour passes, the key arrives, IDs come out and the gate opens. Meanwhile we’re amazed at the speed of construction, the bulldozers flattening hills, raising dust and shifting the route of the fence.