It is very hot during the last week of the Ramadan month and the streets of the villages are almost void of vehicles and people.

Habla – the gate is still shut. Two Habla inhabitants + a driver in his car are waiting to enter the village. At the other side there is a vehicle and a few people who are waiting.

The military vehicle arrives. A few moments are spent on getting organized. Those who wish to leave are sent to the checking station, the papers of those entering are checked by the military policeman near the gate.

people (6 men and one woman) are leaving the village. The plant nursery vehicle enters.

Balal, one of those who wished to enter, is checked and detained. He has a work permit for Israel, he lives at Habla, and although his entry permit is for CP 109 he wishes to enter by the Habla CP, because of the heat, the fatigue and the fast. This morning he left for Israel by the Eyal CP. The soldiers remain hardhearted, even a phone call to the CPO is of no avail and the exhausted Palestinian remains waiting. "I have an entry permit to Israel and I don't have a permit to return home" he says and points in the direction of Habla.

We try to explain to the soldiers the absurdity of the situation, ask them for some flexibility, but they remain steadfast: "We obey orders".

A tractor leaves the village and three other Palestinians enter. We notice a group of women who are detained near the gate at the way out from Habla, in the blazing sun. A Palestinian explains that they are on their way to Jerusalem to celebrate the Ramadan.

We leave and take Balal till beyond the Eliyahu CP and return in the direction of Alfey Menashe.

We have parcels with toys for distribution to the children of the Bedouin village Arab A-Ramadin. The joy of the children who fall upon the piles of toys is heartwarming. It is so easy to bring joy to a child's heart 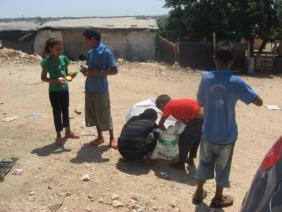 A military command car and three cars with yellow number plates pass in the village. We have no idea where they are headed to. We continue westwards on road no. 55.

We turn right at Azzun and continue on the road which leads to Tul Karem, passing under road no. 55 (separation by levels) through Jiyus, Kafr Tzur and A-Ras, in order to reach Khirbet Jubara. We have heard about complains by residents, about different matters, and are going to see what chances there are of meeting residents and hearing directly from them. At the T junction where we used to observe, instead of turning right with the road that leads to Tul Karem (under road no. 557, another separation by levels), we continued straight northwards according to the signpost that points to Jubara 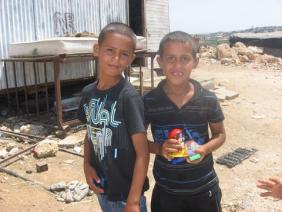 Jubara CP (753) "Life Fabric Gate" – we parked the car on the side and told the soldier who approached us that we wanted to go to Jubara. At first he said that "this isn't here" and then that the passage needed an authorization as there it is "the blue zone" while we were in the "red zone". Behind us there s a red signpost warning not to enter the A zone from the direction we came from. The soldier at the CP explains that one continues on the road and turns left (to Tulkarem) one reaches Zone A. He also explains the known entry regulations to a settlement which is situated in the Juncture Region, he has clear instructions about who is allowed to pass and what it is allowed to pass.

A vehicle arrives and while the driver enters to be checked, the passenger who is with him explains to us that there is a possibility to pass from the village to Israel on foot, on an unpaged road; and also that one has to get an authorization to take across any goods that are beyond the limited personal use. (We heard a lot about this at the time in Ras A-Tira.

Our presence makes him nervous and we are politely asked to leave(.

We returned by the same route to the village of Tzur, at the square we turned eastwards (in the direction of Kur Haja and Punduk). At the turning, before Kur, we turned to the left (northward) on the road leading to Beit Lid and which still isn't marked on the maps.

Beit Lid – we stop at the grocery to buy goods.

Anabta CP – it is quiet, there is little traffic.

Te'enim CP – cars with Arab drivers are being meticulously checked. The car which passed before us was asked to stop on the right side beyond the CP for a throrough check. We asked to soldiers how is was possible to enter Hirbet Jabara. They directed us to the northern CP "perhaps from there". They also talked about "red Zone" and "blue Zone": they don't understand A. B and C.

"on the Israeli side", south of the CP, there are considerable digging and construction works. For what purpose?

Irtah (Sha'ar Efrayim) – cars arrive from which workmen, who return home, descend. The traffic is less lively than on normal days.

A few details about Hirbet Jabara, A-Ras Kafr Tzur and the Fence:

We knew the village of Hirbet Jabara (three kilometers east of Taibe) when the dividing fence was erected in 2003 and it remained with its 350 inhabitants and most of its lands on the western side of the fence, in the juncture region. Our shifts observed the entrance to the village and to the Bank at the CP (Te'enim) and we witnessed all the changes in the area: The building of a new fence, the roads, the changes at the checkpoints/gates

Although a short time ater the fence was erected in 2003 the state of Israel decided to change the delineation of the fence in the area and to transfer the village to its eastern side and to join it to the rest of the Bank, it still is separated from Tul Karem, its county seat and the rest of the Bank, and all the restrictions and limitations apply to it. Since the construction of the fence in this area the villages of Peraon (north of road 557) Hirbet Jabara, A-Ras and Tzur appealed a few times to the High Court of Justice against the transit arrangements and especially against the delineation of the fence (the existing one and the one proposed by the security forces and the government of Israel).

One glimpse at the map shows the noticeable deviation of the fence delineation from the green line in this area "owing to the Sal'it settlement in the regional council Shomron. It was established in 1979 as a Nahal settlement, by a Bnei Akiva group, and was made a civilian secular workers' settlement. The colonizing movement: the Herut Betar movement. The declared aim of its establishment was the creation of a buffer between Arab settlements on both sides of the Green Line" (taken from their site). Till 1996 60 families lived there and till today their number incrased to 108.

The different petitions delayed the execution of the modification of the fence's delineation, but the High Court of Justice decision (as far as I understand the last one, dating September 2009) which unified all the petitions, determined that the delineation proposed (by the Government) which isn't based on the future development plans of the two settlements, Sal'it and Zofim, is proportional and must be implemented. The new delineation is supposed to return to the east side of the fence about 2500 dunams from the lands of the villages and the village of Hirbet Jabara, but to leave on the west side 40% of its lands.

The High Court of Justice also orders the military commander, after the setting up of the new delineation, "to reexamine the location of the gates and their opening hours, in accordance with the needs of the farmers and in order to minimize the damage as much as possible". About gate 753 it was said: "There is no disagreement about the illegality of the fence fragment on which the gate is situated, which severely damages the life texture of the inhabitants of the villages adjacent to it. If this segment of the fence is dismantled, the activation of the gate fixed in it will become redundant".

Who knows what happened at Hirbet Jabara since the verdict and why, if the village still is situated in the juncture area, can't we reach it?