A lot has been happening recently in the village of a-Tuwani.  We decided to devote today’s shift to visiting the village.  Despite our long acquaintance with the villagers, despite our joint struggle (like other peace groups and human rights organizations) over their right to remain there and live safely, we are shocked anew each time by the maliciousness and obtuseness of the behavior toward them by the state and its institutions.

Their only sin is that they live at the foot of the notorious settlements of Ma’on and Ma’on Farm, and that among their houses are archaeological remains from the Roman and Byzantine periods (what Israeli locality doesn’t sit on an archaeological site?).

A bit of history

After considerable struggles and the involvement of many parties, it was finally agreed to connect them to a water supply (they depend primarily on cisterns). But lo and behold, when excavations had just begun to lay the pipes, someone remembered that the location was in fact an archaeological site worth researching.  What’s more important?  Water for people (non-Jews) or the remains of a synagogue thousands of years old?  You guessed right.  So they stopped preparing the infrastructure for the water supply, and stuck a sign from the Antiquities Authority in the middle of someone’s yard,  and dug.  Now we have an important site.  You can’t touch it; you can only make a pilgrimage.

Last Friday, 3.2.12, a group of tourists arrived on a tour run by In the Bible’s Pathways, from Sussia.  They first went to Yata to see the pools from the time of Nabal HaCarmeli, and then came to see the remains of the ancient synagogue in a-Tuwani.  “Did anyone let you know, try to coordinate with you?,” we asked the people whose yard had become sanctified.  “No,” they replied in surprise.  The buses parked at the entrance to the village, the group entered on foot accompanied by police and soldiers.  They prayed and sounded shofars.  Yehoshofat Tor and his brother from Havvat Ma’on, and settlers from Ma’on,  joined them;  they never miss an opportunity to enter a-Tuwani and harass its residents .  After an hour and a half of uproar, they left.

“What about the water pipe?  When will they connect you?”, we asked.  “Who knows,” they reply.

That Friday night about 25 more olive trees near their houses were mysteriously cut down, as well as another 15 located farther away.  The people from Tuwani complained to the police.  Last night, at midnight, they heard noises and went to see what it was.  “Police, army,” they were told, “Go back inside.”

Yes, they came.  To guard?  To arrest settlers?  “Go home, go home,” yelled the law enforcement officials to the settlers; that’s what the residents heard.  The security forces were there until 3 AM, chasing the rioters away.  No one was arrested.  That’s how it was day after day, night after  night.

Again, a stupid question:  Would they behave that way if Palestinians dared damage Jewish property?

Since 1981, when Ma’on was established, and then the adjoining farm, the residents of a-Tuwani “benefit” from the blows of those “dear ones.”  It began with polluting wells with chicken carcasses, then uprooting olive trees, and finally harassing and frightening children coming from nearby localities to attend school in the village.

Since 2004, thanks to the efforts by Hagit Beck, the residents and the Knesset children Committee at that time, a solution of genius was devised, to which the IDF agreed and was forced to carry out till now, namely – every morning an IDF jeep and soldiers accompany the children coming from Umm Tuba who have to pass by Ma’on on their way to school.

We welcomed the solution.  It was better than nothing.  But we thought:  Our wise men of Chelm haven’t considered (they don’t dare) preventing the thugs from Havvat Ma’on from lashing out at the children.  It’s simpler, fairer and cheaper to provide a military escort every morning for a group of school children.

Has one of us ever  tried to apply that formula where we are?

That’s how things have been since then.

So what’s happened in the interim?  Residents of Tuwani say that recently the army hasn’t shown up at all, or arrived late, and the children, who were supposed to be escorted at 7:30 AM so they’ll reach school on time, are late or return home because they’re afraid to go unescorted.

A phone call to Col. Guy Hazut, the commander of the Judea brigade, to hear the IDF’s version.  “We’re taking care of it,” he promises me.  “I spoke with my soldiers, who are angry at the valuable time wasted.  They’re the ones waiting, the children are late or don’t show up at all.  Why doesn’t anyone complain about that?”  And he also said that the activity comes at the expense of operations, and that the school bus of the Southern Hebron Hills Regional Council is also late sometimes because of security reasons.  “It happens,” says Col. Hazut.

We’re taking care of it, he says again.

It’s almost 8 AM; we hear the children merry in the distance.  The longed-for military jeep is visible on the horizon.  They’ll be late to school today as well.  Men belonging to a peace organization also arrive; they’ve been accompanying the children and observing what’s happening.  They also report on the army’s behavior.  We asked them to give us daily reports, and photos, if possible.  Let’s hope that, confronted by facts in real time, the army will carry out the agreement it made.

The following is an update from the school patrol of yesterday morning, 05/02/2012. The escort was 50 minutes late. The children waited alone in a dangerous location where in the past they were attacked by the settlers.  Where the army jeep should have been waiting, two settlers stood shouting and whistling to frighten the children. After this incident the children returned to the village of Tuba because the settlers stayed near the chicken barns. The escort didn't arrive at the end of barns to meet the students and didn't complete its entire route, but instead left when it was near Ma’on’s greenhouses. Ma'on’s security chief also followed the children at a distanceOperation dove team 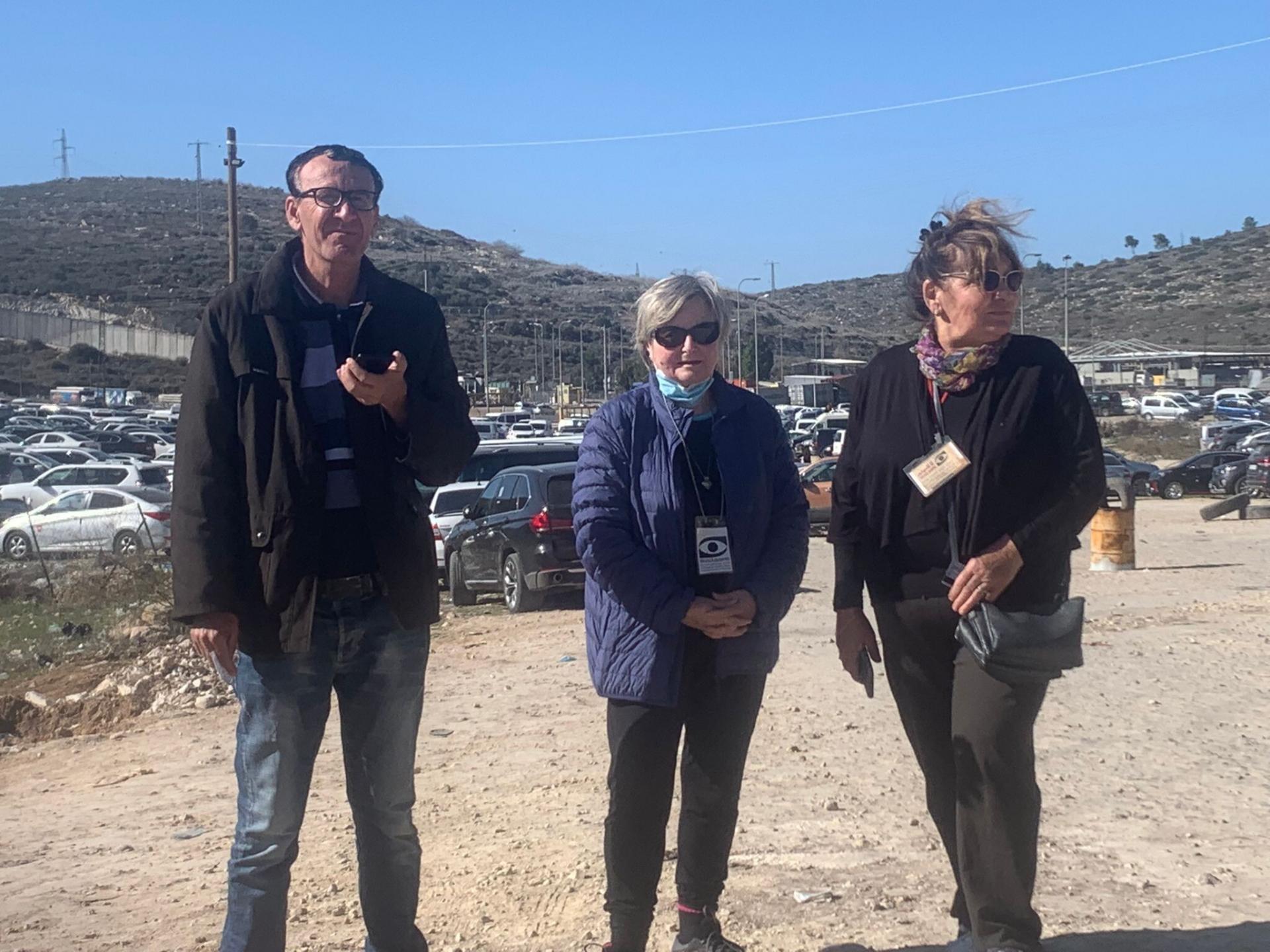