Today is January 1st. Schools on the West Bank are closed for the new year holiday. Nothing unusual occurred.

We entered Al-Tuwani, where an archaeological dig is underway.  We went there because a flyer had been distributed in synagogues reporting that an ancient synagogue had been discovered there.  A mosaic floor is visible at the site (photos attached), as well as the remains of various rooms built in the Byzantine style.  A person living nearby said he hoped the dig would enrich our knowledge of the period but he was also apprehensive about its implications for the continued existence of the locality in which people have been living for many years.  The Civil Administration, meanwhile, has postponed laying the water line, work on which was already supposed to have begun.  Postponements, and more postponements.  (We still remember the well that was poisoned about six years ago by an animal carcass that someone had dumped into it).

We bought excellent, inexpensive olive oil from the grocery at the Hazif junction. 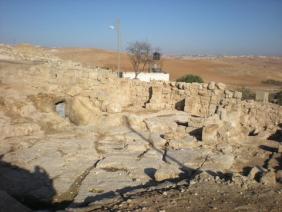