We arrived at 10:00 – actually, 9:00 Palestine time; the morning and afternoon shifts should remember this.  The same arrangements as last year, men cross on the eastern side, through the regular pedestrian crossing.  Women go through on the west through the vehicle lane.  The parking area is completely closed off.  Women go through three inspection stations.  Initial screening, everyone who doesn’t meet the “criteria” is sent back, then an additional inspection!

Sheets of blue fabric shade the area; later we learned that this was a Palestinian initiative.  Many Red Cross personnel with wheelchairs.  A Palestinian organization distributes baseball caps to the children.  Very many soldiers of different ranks from various units – from a private to a brigadier general who stops by.  Civilian security personnel, Border Police, DCO staff and additional forces, all “guarding punctiliously” - each other as well.  Making sure everyone follows orders.  Everything must be organized.

Snipers along the wall ready for action; there’s also a soldier with a rifle and telescopic sight in the pillbox.  And everything is, in fact, organized.  The women go through, not crowded together as in previous years, but it’s the first Friday, when there are fewer worshippers.
After the first screening, many women are sent to the “rejection gate,” where the true picture is visible to observers.  Families arriving with children “the wrong age” face a problem:  go on to pray anyway, after having risen early, travelled far and probably spent a considerable sum on transportation, or take the boy or girl home?  And if they do go through, how will the child get home on their own (!?)

Moreover, the separate lines for men and women, which is certainly good for the women, divides family members who arrived together and are going to prayers together.  Children must go through with a biological parent and a birth certificate.  Sons are allowed to accompany a mother, but we saw a girl who came with her father and was allowed to cross only after a discussion, and he went through the men’s lane.  Some give up; others continue nevertheless.  Occasionally someone tried a second time (after having been turned back) and did manage to get through.

The soldiers don’t always know the rules either, and the Border Police soldiers must correct them so they’ll let holders of blue (Israeli) ID cards cross regardless of their age.

A 49 year old man in a wheelchair who’d suffered a stroke wanted to go pray.  Maybe next year, when he’s old enough to cross, he’ll no longer be alive.  Permission denied.

And, of course, the day wouldn’t be complete without the kind of trivial incident that exposes the violence of the ruler toward the ruled:  a man, apparently suffering from a developmental disability, reached out to help someone from the DCO lower the awning.  The soldier thought he was being attacked, fell upon the Palestinian, called for the Border Police force, there was a scuffle, the Palestinian ran wild, began yelling, “I just wanted to help him...,” wanting them to understand that he’s the victim.  It’s clear what happens next:  “Turn him over to the Israeli police!”, and they drag him in.  Tamar and Tami G. documented the incident.

As the time to cross was drawing to an end – 12:30-13:00 Israel time – At the women’s crossing they’re not giving up!!!  Young women with their young children face the soldiers stubbornly.  They know they won’t be able to cross but don’t waive their right to protest.  They don’t move, argue in Arabic.  “It doesn’t matter that the soldier doesn’t understand – I say what I think!”

12:15  A special police force is deployed to disperse a violent demonstration of about 50 men, all nearing the age of 50 – and thus not yet permitted to cross – who nevertheless hoped to participate in the important services…
The officer gives an order and two horizontal lines of policemen with plastic shields and foam rubber guards on their shoes move the demonstrators a few dozen meters away from the crossing.

A final comment about “criteria” and permits:  According to what’s written, women up to the age of 45 need a permit; children up to the age of 12 may cross with a parent; men over 50 don’t need a permit.
A woman from Jenin told us she arrived without having tried to obtain a permit – only two of 65 requests submitted by people she knew were approved.

There’s nothing to add regarding “criteria” for worship.  For years I’ve been imagining an absurd scene:  Near my home on Shivtei Yisrael Street in Jerusalem (along which people walk from Mea Shearim to the Western Wall), “criteria” are applied to determine whether or not men and women will be allowed to go pray. 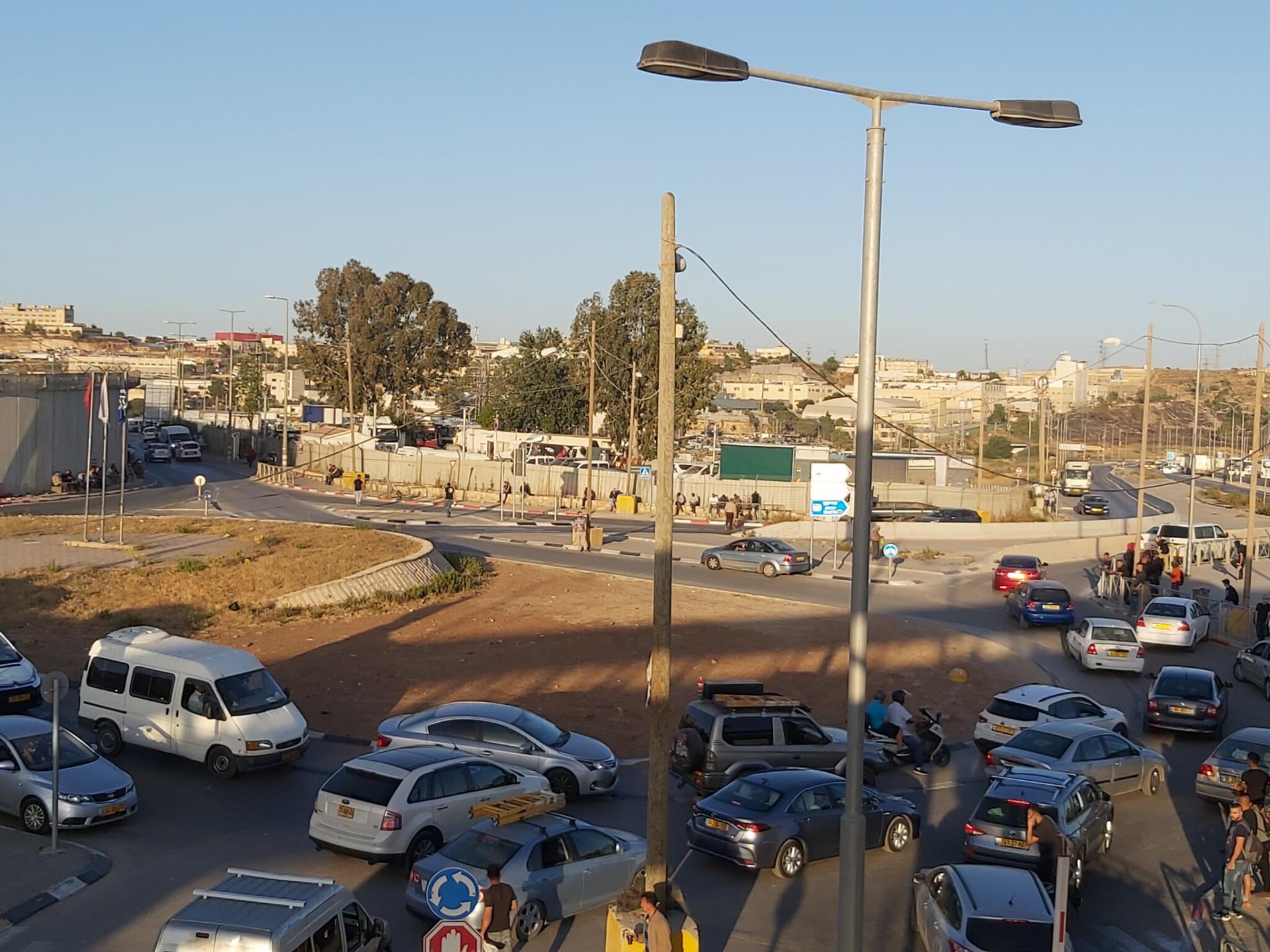 Car traffic in the square